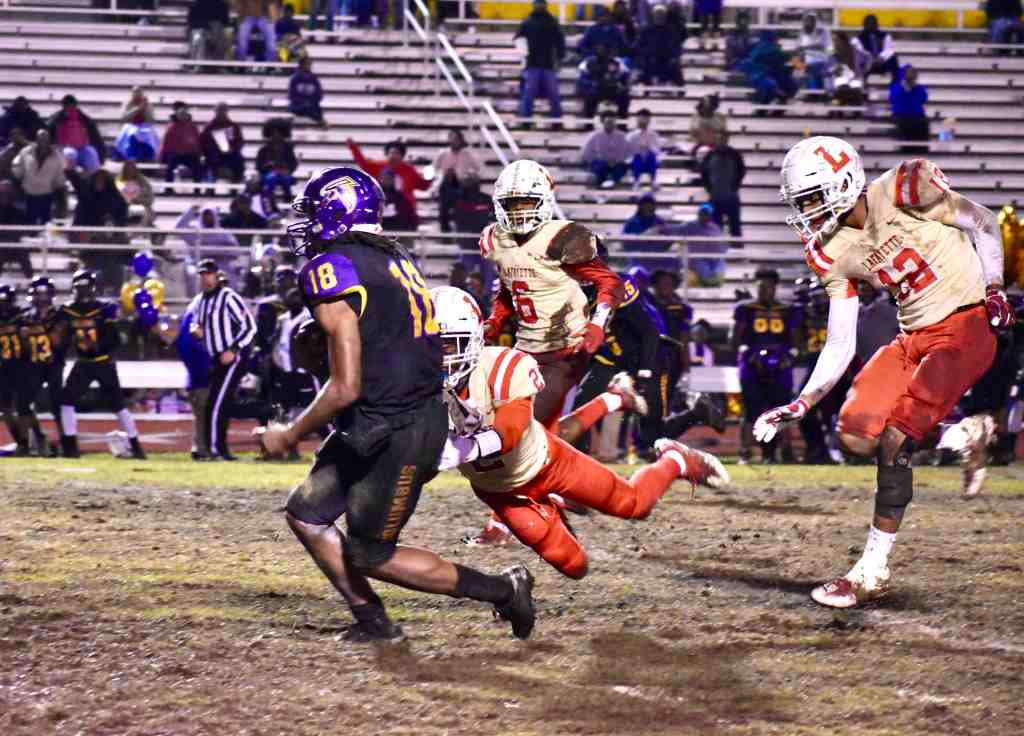 COLUMBUS – Lafayette needed a wakeup call, and it came in the form of a Columbus touchdown.

Trailing 3-0 at the half, Lafayette’s Randy Anderson fumbled on the second play of the third quarter. Columbus (3-7, 2-4 Region 1-5A) scored easily off the fumble to go up 10-0. Then, everything changed.

Extensive rain over the past few weeks may have been good for crops, but it did a number on the grass field at Columbus. The field was a muddy mess before the start of the game and just got worse as the affair went on. Conditions made the standard rush game of Lafayette falter a little bit and certainly slowed the game down in the first half.

Scoring the first points of the game going into halftime were the Falcons. A big pass play and a flurry of smaller runs set Columbus up at the Lafayette one-yard line with 11 seconds remaining in the half. A big Commodores stuff on a run play up the middle forced Columbus to kick, taking a 3-0 lead into half as time expired.

“I said a little bit at half, but we’re past the point of needing to get in their face and yell at them,” head coach Michael Fair said. “This is a mature football team, and they knew what was going on. They knew we weren’t playing very well and that other team was playing really well. In these field conditions, I think it just took us a little while to get our footing.”

Anderson’s fumble to start the second half and the ensuing Falcon score put Lafayette down 10-0.

He quickly redeemed himself. Fair said the first thing he said on the headset after the fumble was to give the ball right back to him on the next play. That next play, Anderson broke off a 40-yard run. Five plays later, he scored the team’s first touchdown to cut the lead to three. It was the first of four touchdowns for Anderson on the ground.

“I was just telling my team that I’m going to pick everything up,” Anderson said. “Those guys had my back, and they knew we were going to do what we had to do. We’re used to it, but it was so thick and muddy. We had to get used to that.”

After Anderson’s first score cut the Columbus lead to 10-7, Lafayette forced a fumble on the next drive. Anderson scored again just two plays after the fumble recovery. In a matter of a handful of plays, the score flipped from 10-0 Columbus to 14-10 Lafayette.

Lafayette would go on to tack on two more scores in the fourth quarter, all under Anderson’s legs. The offense that literally struggled to find its footing on the muddy field in the first half, failing to even move the ball past midfield, scored 28 in the second half.

“I think we grew up a lot tonight,” Fair said. “If you’re going to be successful in the playoffs, you have to go through some tough stuff along the way. Tonight, we grew up.”

Surviving the scare, Lafayette Advances to 8-2 on the season (5-1 Region 1-5A). They close the regular season next week at home against Lake Cormorant.