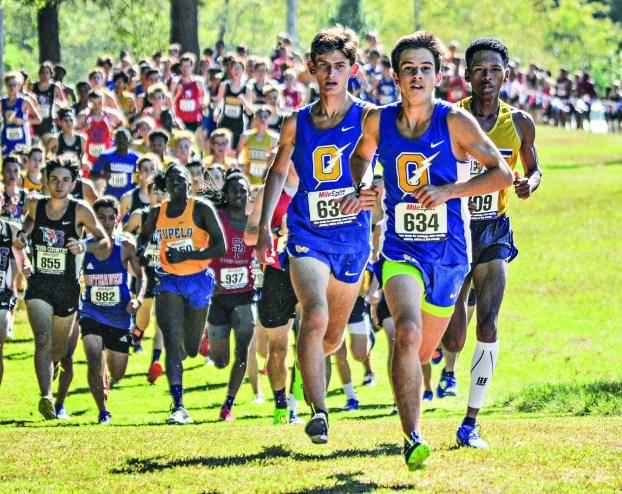 Oxford High School senior Walt Johnson is statistically the best runner in the history of the school.

Wednesday, along with the whole OHS cross country team, he’ll run in his final state meet as a Charger.

Johnson was already relatively decorated coming into his senior year. He had appeared on the podium twice at a state meet, finishing third in the 2018 state cross country race and second in the 3,200-meter at the 2019 track state championships. But these past few months, Johnson has taken it to another gear.

In late September, Johnson won the Saltillo XC invitational, coming within three seconds of the Oxford all-time 5k cross country record with a time of 16 minutes and 2.10 seconds. Just weeks later, Johnson didn’t simply break the school record. He ran straight through it with a 15:20.95. Now only did he set his own personal best by over 30 seconds, he also broke the school record by nearly the same number.

“It made want to go even harder, honestly,” Johnson said. “That weekend, it was crazy. I never expected to be that fast. I knew it was going to be a nice course and great weather. Going in, I kind of knew I was maybe going to PR, but to have 39-second PR… is kind of insane.”

Not much changed for Johnson this year, he’s just doing everything better and to a larger degree. This summer, for example, he made an emphasis to log more miles in his training. He said he didn’t really care how fast he was running; he was just logging miles.

A normal week was over 50 miles then, something he toned down a bit as school started and the team tapers down to try and hit their best times as the season ends.

“It’s been very fun to watch. Really fun,” head coach Chris Patton said. “He really just wanted to break that 16-minute barrier. Then when he hit that, it was one to the next thing. And breaking that was motivation, just kind of ‘let’s see how fast I can get.’”

That Pontotoc course, the one Johnson set the record on, was fast for everyone. A large chunk of the varsity squad set personal records at that race, in addition to Johnson.

From those summer miles and morning workouts in the school year, this Charger team has rallied around Johnson’s record-breaking year.

“His work ethic really rubs off on these other kids,” Patton said. “They see how hard he’s working out and how many miles he’s putting in. They want a piece of that success and they want to see their times drop like his has.”

As a whole, that rubbing off certainly hasn’t hurt the Charger cross country team. In their final tuneup before states – Oct. 19 at Senatobia – Oxford won the boys race in a landslide and finished second on the girls front. They’ll get their last chance on the season on Tuesday at States down in Clinton.

The University of Mississippi announced Wednesday its selection committee to find the school’s new vice chancellor for intercollegiate athletics. Following the... read more