How Ole Miss is planning to attack the Auburn Tigers 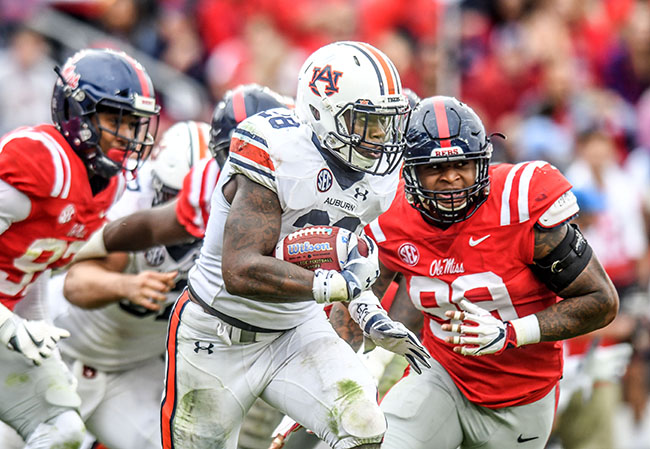 Ole Miss hasn’t played a defense all season that’s quite like the Auburn Tiger defense they’ll go up against on Saturday.

For the Tigers, that defense all starts up front. This isn’t going to be the best defensive line the Rebels have faced in 2019 – it’s going to be one of the top they’ve faced this decade. For Ole Miss to have a shot at knocking off the long shot upset, their plan centers around neutralizing that front.

“It’s one of the top defenses we’ve played since I’ve been here. They’re very, very good in the interior and really good in the secondary. And they’re also very physical at linebacker,” head coach Matt Luke said. “We have to do a good job at staying away from negative plays and not turning the ball over.”

Coming off a bye week, it’s nearly certain that Rich Rodriguez will have implemented some new wrinkles in his offense. A few weeks back, we saw him throw two quarterbacks on the field at the same time for a stretch of plays that worked beautifully. Against a front like this, they’ll need to switch things up.

With more time to prepare, it’s easy to imagine Ole Miss having a handful of new formations and new looks that they’ll pull out against Auburn. It’s good to show teams looks they haven’t seen on tape, but at the same time – especially on the road – teams don’t want to get too far away from what they do best.

“The last thing you want to do with our guys is to have some indecision and confusion up front. Then all of a sudden you can’t execute,” Rodriguez said. “If you poorly execute against a unit as good as them, then it’s really bad. I think we’ll try and do what we do well, but there’s not a lot of people that do well against their front anyways. We just have to eliminate the negative plays and obviously can’t have turnovers… easier said than done.”

Derrick Brown is the best interior defensive lineman in the country. Look at that power. pic.twitter.com/GcgyYnNNMr

Rodriguez referred to the Auburn defensive line not just as the best unit in the country, but as the best one he’s seen in a few years in college football. The math on that checks out.

Defensive tackle Derrick Brown is the No. 7 overall player on Todd McShay’s 2020 NFL Draft big board. Defensive ends Nick Coe and Marlon Davidson are both projected as second round picks by McShay. In college football, where there’s 130 teams in FBS football, having three guys on one defensive line that will all be playing a long time on Sundays is simply absurd.

Quarterback John Rhys Plumlee was limited throughout the week put practiced in full late. The team is working under the assumption that he won’t have any limitations come game time, and they’ll be implementing the similar two quarterback role as Rebel fans saw against Missouri and Texas A&M.

For Auburn offensively, despite the talented true freshman quarterback in Bo Nix, everything starts with their running game. Gus Malzahn’s offense features a variety of ways to get their running backs going downhill complimented with motioning receivers and runs that put playmakers in space heading towards the sideline. It’s an offense that will challenge the Ole Miss outside linebackers to make tackles in space and stay disciplined through the misdirection.

Regular starting running back Boobee Whitlow is still not 100 percent, recovering from a knee injury despite playing some out of the wildcat against LSU a week ago. Yet LSU served as the breakout for freshman D.J. Williams, who went for 130 yards on 13 carries. Regardless of who is in the backfield, the goal for Ole Miss is to slow down that run game, so they can get Bo Nix is some third and long situations. That’s where defensive coordinator Mike MacIntyre can really get to the true freshman quarterback.

“You want to show him new things, but with all their different formations sometimes it’s harder for you to disguise,” MacIntyre said. “(Nix) does a lot of good things. He’s so athletic and he extends plays with his feet. Then he can throw the ball well downfield – there’s a lot of deep balls that I’ve been impressed with. Hopefully we can get them in third down situations where we can do more variable things.”

Ultimately, Auburn is just really good. They’re the No. 11 team in the AP Poll and No. 10 team by SP+, an efficiency metric. With an Ole Miss offense predicated on their ability to run the ball, it’s an Auburn defense who ranks third in the SEC in their ability to stop just that, allowing 105.9 rushing yards per game. Ole Miss averages 232.5 per game on the ground. That ability to run the ball against one of the best defenses in the nation will be the key if Ole Miss wants to go into Auburn and pull off the upset.