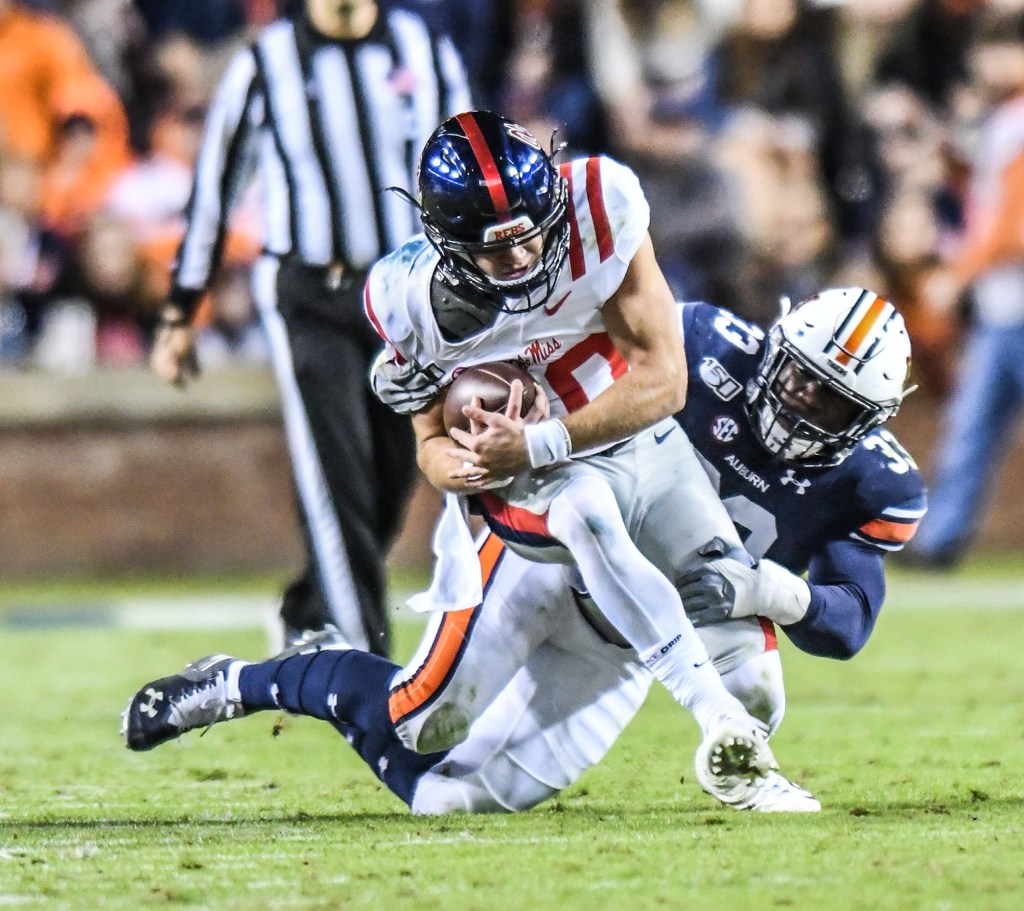 AUBURN, Ala. – Ole Miss had a shot on the road against the No. 11 team in the nation.

The Rebel defense provided the team with ample opportunities Saturday night under the lights at Jordan-Hare Stadium. But the offense’s inability to move the ball and sustain drives dug them in a hole too deep to overcome, ultimately falling 20-10 to Auburn.

At halftime, the Rebels were very much alive. Set up by a 55-yard Elijah Moore punt return, Ole Miss was able to punch in a three play, 23-yard touchdown drive before the half. Thanks in part to two missed Auburn field goals in the opening frame, the touchdown cut the Tigers’ lead to just 10-7 at half.

Gus Malzahn switched up a few things with the way the team was running the ball. The SEC’s No. 2 rushing offense ran for just 78 yards in the first half. On their first two drives of the second half, they got 64 more.

Where Auburn adjusted at halftime, Ole Miss came out stagnant. The Rebels got the ball just twice in the third quarter. The two drives, both quarterbacked by John Rhys Plumlee, went a combined 10 plays for 31 yards, both ending in punts. By the end of the frame, Auburn had expanded their 10-7 lead to 20-7.

The game billed as strength-on-strength, each team’s ability to rush the football versus the other’s ability to stop the run, was clearly won by the Tigers top to bottom. Ole Miss actually did a good job in pass protection, holding the SEC’s No. 2 defense in sacks to none and just two tackles for loss. The offense was unable to sustain drives, running just 69 total plays in the contest compared to Auburn’s 90.

Ole Miss actually cut it close late. A one-yard Snoop Connor touchdown with 5:45 remaining in the game cut Auburn’s lead to 20-14 late. Plumlee opened it up on the drive to cut it to a one-score game, going 4-5 passing for 33 yards on the touchdown drive.

Auburn converted on third downs of both eight and 10 yards on their ensuing drive, running down the clock to the point in which Ole Miss would not touch the ball again until there was 1:14 to play. Plumlee led an admirable final drive before throwing an ill-advised improvisational interception to end the game. Simply put, the team ran out of time for a real, efficient final drive.

Plumlee would finish with 86 passing yards on 10 of 21 throwing and an interception. Matt Corral played fewer snaps by comparison, completing 3 of 6 passes for 13 yards. The Rebel offense totaled 266 yards.

How Ole Miss is planning to attack the Auburn…