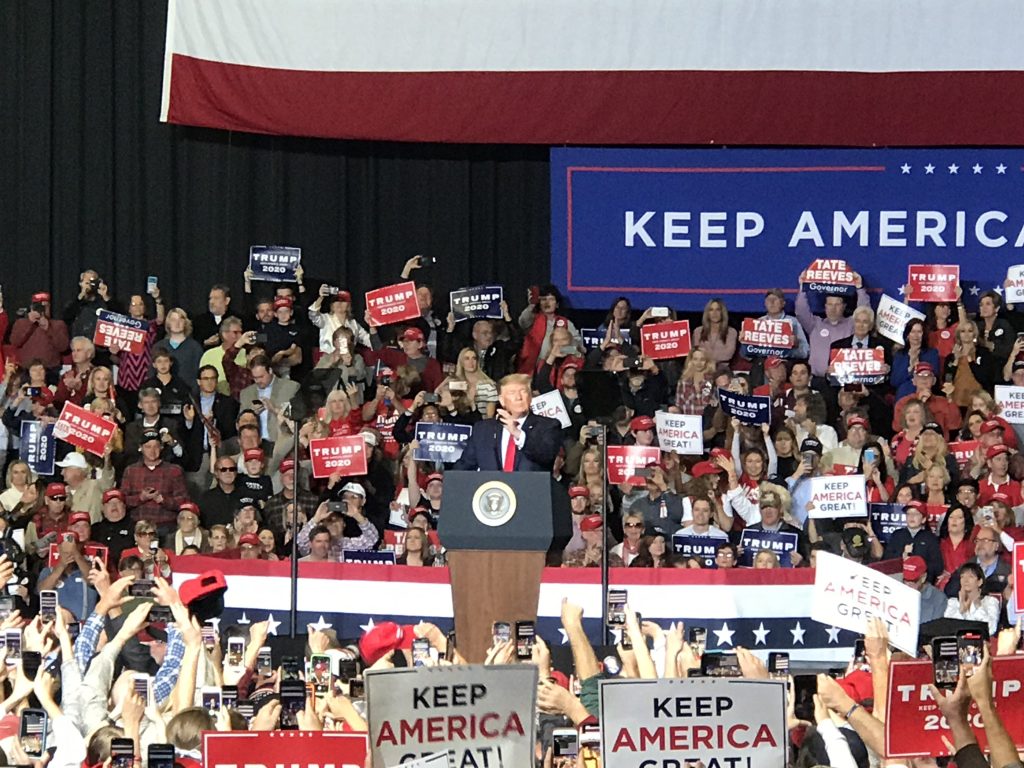 TUPELO — With four days before one of the closest governor’s races the state of Mississippi has experienced, the leader of the free world lent his support to the Republican candidate on Friday.

Inside a BancorpSouth Arena at max capacity, President Donald Trump held a ‘Keep America Great’ rally while campaigning for current Lieutenant Governor Tate Reeves. Friday’s stop was the second of what has become a three-pronged full-court press by the GOP ahead of Tuesday’s general election.

On Oct. 24, Donald Trump, Jr. visited Oxford for the Good Ole Boys & Gals barbecue where he stumped for Reeves in a speech that lasted over 40 minutes. On Monday, Vice President Mike Pence is holding a rally for Reeves in Biloxi.

“I can’t believe this is a competitive race in Mississippi,” Trump said. “(Hood) is not what you want. Tate Reeves is the right guy.”

Prior to Trump taking the stage, there were several other prominent figures who spoke, including outgoing Gov. Phil Bryant. Bryant touted his relationship with Trump and how Tuesday’s election was the beginning of a Republican sweep, ending with next year’s presidential election.

In the most recent polling data put out on Oct. 23, Reeves is just three points ahead of Democratic candidate Jim Hood, with a 46 to 43 percent edge. A key talking point during all of Friday’s speeches was to sell Reeves as the clear choice as Mississippi’s next leader.

“(Hood) says ‘I’m just like y’all. I’m just a good ole boy. Y’all know you me’,” Bryant said of Reeves’ opponent. “Oh yeah, we do know you. That’s why we all vote for Tate Reeves for governor.”

While stumping for Reeves, Trump also used the time to campaign for himself as his re-election is slowly shifting gears, with primaries beginning on Feb. 3, starting with the Iowa caucuses.

The Democrats have begun their attempt to impeach Trump before his campaign for 2020 can begin. On Thursday, the U.S. House of Representatives passed a resolution endorsing an impeachment probe into the current President.

“It’s all a phony deal, this whole impeachment scam, to try to undermine the 2020 election and to de-legitimatize the 2016 election,” Trump said.

Although speaking out against Trump’s rally, Hood, the current state attorney general, made an appearance in Tupelo hours before and spoke about the impeachment proceedings.

Reeves also made an appearance outside the arena, and gave his thoughts regarding the impeachment and on his opponent in Tuesday’s election.

In the middle of his 85-minute speech, Trump introduced Reeves to the stage. Reeves spoke for roughly two and a half minutes.

Trump brought Bryant and U.S. Senators Roger Wicker and Cindy Hyde-Smith onto the stage and recognized other Mississippi officials in the audience before speaking more and closing out the rally.