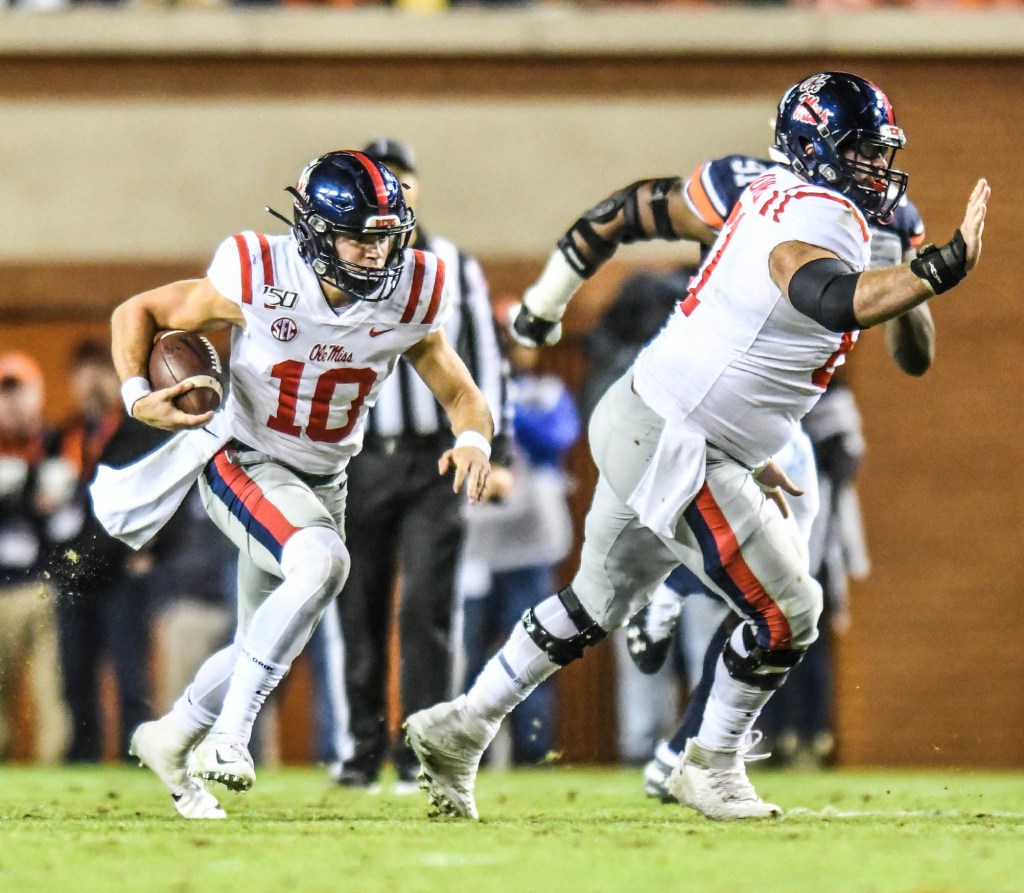 AUBURN, Ala. – Ole Miss has been able to run the ball all year.

They actually came into this weekend leading the entire SEC in rushing.

According to offensive coordinator Rich Rodriguez and everyone watching the game, the problem is, they can’t throw the football. They simply can’t pass the ball.

“It was awful,” Rodriguez said, referring to the Rebels’ passing game. “We have to get better in the passing game. We have to pitch and catch and some of that stuff. I have to see what we can do and what we can execute. At this point, you’re not going to do your schemes all over again, but the passes we missed today our guys have completed pretty well in practice. We just didn’t do it today.”

Ole Miss completed 14 of 27 pass attempts on Saturday, totaling 99 yards and one interception. That’s 3.67 yards per attempt. At one point, midway through the fourth quarter, the Rebels were 7 of 17 passing for 31 total yards.

“We have to look at (the passing game),” head coach Matt Luke said. “We’ve been running the ball first, so maybe get some more play action and shots down the field.”

A big portion of the Rebels’ issues seems to be the predictability. So many drives start the same way: Run, run, pass. Two runs to start the drive results in less than intended, then the Rebels force themselves into obvious passing situations.

It’s something the team addressed afterward. Modern football is supposed to make it easier on quarterbacks. They’re protected in the pocket from most brutal hits, and all the modern rule changes favor the offense and a receiver’s ability to separate and not get clobbered by safeties coming across the middle.

Yet when the team forces themselves into predictable situations with a third and long, the defenses get that edge back.

“I think there’s a lot of little things that go into it. But me, individually, I can get a lot better,” quarterback John Rhys Plumlee said. “If you stay on schedule, instead of third and six or third and seven, it’s third and two. It’s more manageable.”

Part of Ole Miss’s two-quarterback look, Plumlee played considerably more than Matt Corral on Saturday night, including the entire second half. Rodriguez said he planned to use Corral in the second half; they just didn’t have enough drives and Plumlee was “giving them a spark.”

However, Plumlee went just 11-21 passing for 86 yards and one interception. Corral was 3-6 for 13 yards. Plumlee also added 92 yards and a score on the ground.

The effort is exaggerated by the optics. It’s not great when your play caller is blowing up in the box on national television, clearly screaming about an inability to complete “a five yard out.” There may have been expletives thrown in there.

Plumlee defended his coach, but that’s just the guy Rodriguez is. He gets angry, he coaches with fire, but he does clearly really, really want to win. Sometimes it just doesn’t look great optically when things aren’t going well.

When he came into the press room to talk to media following the game, Rodriguez was clearly still frustrated, having thrown (granted lightly, but definitely not setting it down) his backpack into a corner along with his postgame meal.

“He’s a competitor at heart. He really wants to see this team win,” Plumlee said of his play-caller. “But that’s how he coaches. He coaches intensity and he’s really fiery. But I wouldn’t want to play for a different coach, because he’s a competitor like I am.”

There were some glimpses of positivity, if minor. The second to last drive of the game, Plumlee went 4 for 5 passing for 33 yards. The final drive he was 3 for 5 passing for 24 yards and the game sealing interception, a play where the game would have been over if he took a sack.

It’s not great, particularly the game-ending pick, but two drives of 7 for 10 passing would be a huge improvement.

In fairness, this disaster of a passing night came against one of the better defenses in the country. Auburn entered the weekend ranked No. 10 nationally in SP+ defense, a measure of defensive efficiency. They trail behind only Georgia and Alabama in the SEC in the same metric.