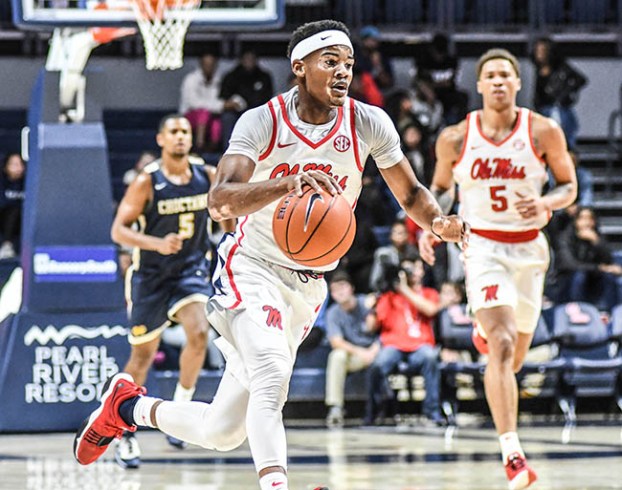 Mississippi's Devontae Shuler dribbles the ball up court against Mississippi College in an exhibition game at the Pavilion at Ole Miss on Monday, November 4, 2019. (Bruce Newman, Oxford Eagle)

The 2019-20 Ole Miss men’s basketball team took the floor for the first time Monday night, cruising to a 69-43 win in an exhibition versus Division II foe Mississippi College at The Pavilion.

Sophomore KJ Buffen scored a team-high 21 points to lead the Rebels to victory. The Gainesville, Georgia, native imposed his will on the Choctaws early, scoring 17 first half points. The 6-foot-7 forward went 8 of 10 from the floor and added a team-high six rebounds.

Defensively, the Rebels forced 20 turnovers during the contest and turned them into 22 points. Ole Miss held Mississippi College without a three-pointer, as the Choctaws went 0 for 3 on the night. The Rebels also controlled the boards 39-24.

Winford Ross posted team highs in points (15) and rebounds (7) for Mississippi College. Ole Miss kept the visitors to a 36.4 shooting percentage (16 of 44). Senior forward Brandon Boston, who recorded 28 points and seven rebounds in an exhibition versus Southern Miss, was held to nine points and one rebound in 29 minutes.

Ole Miss locked down defensively to start the game, limiting the Choctaws to just two points on 1 of 7 shooting through the first seven minutes of the contest. On the other side of the court, the Rebels jumped out to a 13-2 lead.

The Rebels maintained a double-digit lead throughout the majority of the first half behind a spark from Buffen. The sophomore nearly outscored Mississippi College by himself in the opening half, tallying 17 points on 6 of 7 shooting to put Ole Miss up 35-19 at the break. Ole Miss held a 12-2 advantage in points off turnovers thanks to 13 Choctaw turnovers.

Coming out for the second half, Buffen started right where he left off with a layup to match Mississippi College’s 19 points. Two points apiece from Sy, Breein Tyree and Crowley bumped the advantage to 43-21.

A Williams three from the wing doubled up the Choctaws 56-28. The Rebels continued the defensive pressure throughout the remainder of the contest. When the buzzer sounded, Ole Miss finished with a 26-point victory.

The Rebels lift the lid on the 2019-20 regular season Friday, Nov. 8. Ole Miss hosts Arkansas State, the beginning of a four-game homestand. Tipoff is slated for 6 p.m. CT on SEC Network+.