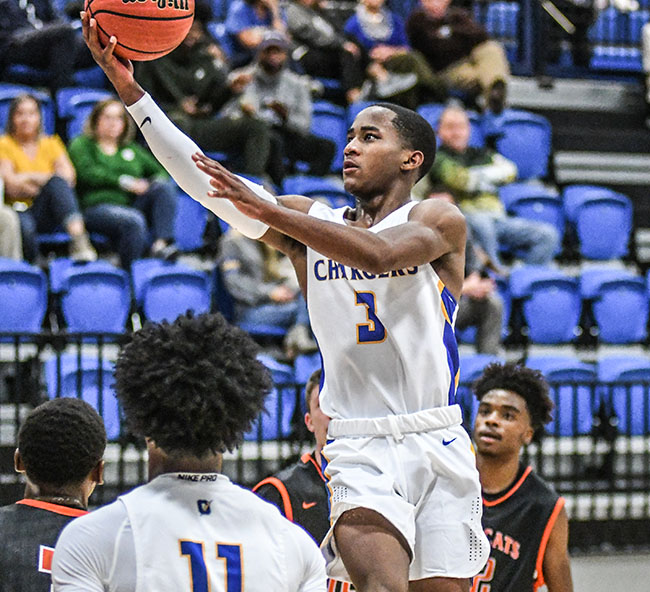 The Oxford boys basketball team never had trouble scoring on Tuesday night in their first home game, but it did take them a little while to figure out the defensive side of the ball.

Trailing by four at halftime after allowing 46 points, Oxford rallied back in the second half to win 89-79.

The first quarter of play featured the track-meet style of basketball Oxford loves to play. With both teams going up and down early, the quarter ended tied at 21 with the Oxford duo of Kylan Blackmon and Tykel Owens accounting for 19 of the Charger points. Where Blackmon got off to the early hot start, knocking down two three-pointers in the opening two minutes of play, Owens ended the first quarter and began the second by scoring 19 straight points for the Chargers.

“It took us about two quarters, sixteen minutes to figure out how to spell defense,” head coach Drew Tyler said. “No doubt, it was a fast-paced game, but I think we sured things up and particularly didn’t give up a lot of second chance points in the second half.”

Despite all the offense, Oxford still allowed 46 points in the first half and trailed 46-42.

Then, the Chargers turned on the gas. A 12-2 run to start the second half gave them their first lead since early in the second quarter, part of a third quarter where Oxford figured out the defensive side of the ball and allowed just eight points. They would hang on to that lead built in the third, slowly expanding it down the stretch to win.

In reality, the game was defined by the Oxford guard duo of Owens and Blackmon. For the entire night, Owens was simply the fastest guy on the court, someone Tyler described as a track star on the basketball court. He scored a career high 41 points on the night. Blackmon showed off an improved range from downtown, scoring 34 points on the night.

The Oxford girls took a big step forward in their season opening win.

Yes, the Lady Chargers beat a perennially good Calhoun City team 57-51, but it’s the way they went about it was encouraging.

Against a Calhoun City team that went 30-2 a year ago in 2A, finishing as the state runner-up, Oxford led the Wildcats after one quarter and trailed just four points at halftime.

Offense came in spurts in the first half. Oxford got off to a hot start to open the season, opening up a 14-4 early lead against the Wildcats. Calhoun City crawled back slowly in a first half that featured a lot of scoring, taking their first lead of the game in the second quarter and opening up a 37-33 lead at the half on the Chargers.

Scoring slowed in the second half. Oxford slowly cut into the lead over the course of the low-scoring third quarter that ended 42-41 in favor of the Wildcats. That’s when Oxford took control, going on a seven-point run to start the fourth quarter. Going up 48-42 during the run. Oxford would hang on to the lead with the help of some late Calhoun City turnovers, winning 57-51.

A big positive for the Lady Chargers came on the offensive end. Last season, Oxford averaged only 45.1 points per game on the season. Tuesday night, they scored 57 against quality competition. In the entire 2018-19 season, they hit 34 three-pointers at a rate of just 16 percent for the season. In their home opener, the girls hit four in the first half alone. They didn’t hit another for the rest of the night, but the 25 percent from distance is an improvement.

“It was a great win for us. Calhoun City is really good and they always play us really hard,” said head coach Cliff Orman. “We made four threes and when we do that it stretches the defense and makes everything else easier. But when we’re shooting we also have to remember to attack that open area and get to the free throw line. But we’re just a lot better offensively this year than in the past.”

Clare Wooten, now a senior, had a career night in the opener. After scoring two points all of last season, Wooten went off for 13 points and three from long range in the first half. Her pace slowed in the second, finishing with 15 points.

Rebel defense “focusing on us” in preparing for New…