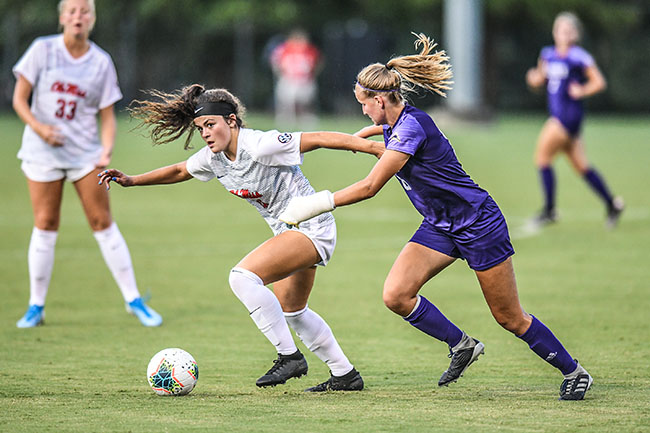 Ole Miss' Mo O'Connor (22) vies for the ball against North Alabama's Kate Wiseman (8) at the Ole Miss Soccer Stadium in Oxford, Miss. on Thursday, August 22, 2019. O'Connor would go on to score late in the second half as Ole Miss won 2-0 in the season opener. The next match is against Memphis on Sunday at 7 p.m. (Bruce Newman, Oxford Eagle via AP)

It didn’t take long for Morgan “Mo” O’Connor to take her on-field impact from Oxford High School down the road to the Ole Miss soccer complex.

On Sunday, at the conclusion of the regular season, O’Connor was named to the SEC All-Freshman team.

In her first season at Ole Miss, O’Connor appeared in 19 games, making 11 starts for the Rebels. She’s scored twice, picking up her first goal in SEC play just last week in a 4-0 win over LSU. She was one of 11 rookies chosen by league coaches for the award.

Ole Miss posted a 10-6-3 regular season record, including going 3-4-3 in conference play. The Rebels won their first game in the SEC Tournament on Sunday, knocking off rival Mississippi State 2-1.

They play against No. 6 Arkansas on Tuesday evening, a big opportunity for a résumé-boosting win for a team with outside hopes on making their fourth NCAA Tournament in five years.