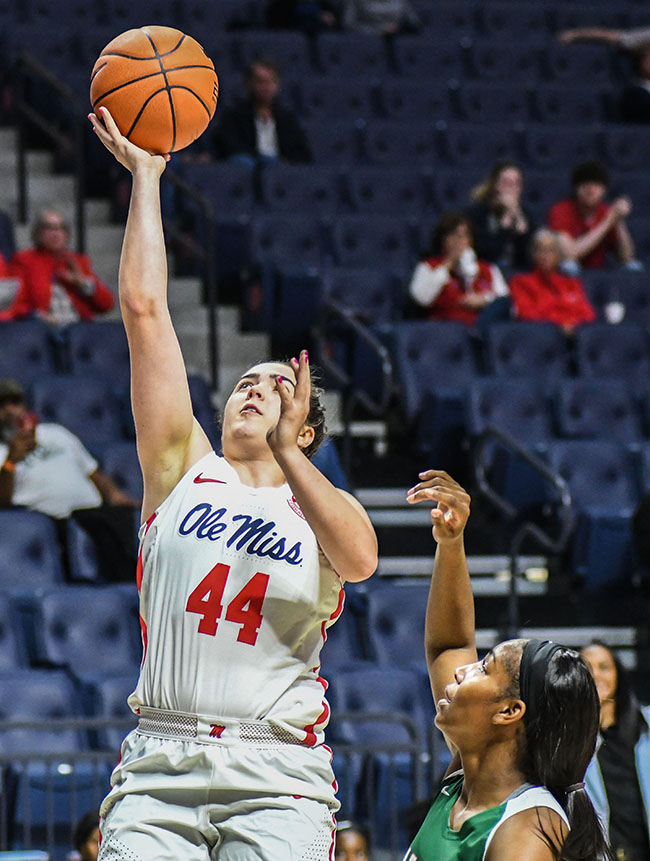 The Rebels (1-0) shot 47.1 percent in the second half after a slow start, eventually forcing the Devilettes (0-1) into 27 turnovers and a 35 percent clip from the field. Nine of the 10 Rebels that saw the court scored on Tuesday, and the Rebel offense was efficient, recording an assist on 20 of 30 made field goals.

“Good to start the season off with a victory,” said Ole Miss head coach Yolett McPhee-McCuin. “As you can see, we’re a young team, so the goal is to just continue to find things that we can get better at every game and focus on those things.”

Leading the way for Ole Miss was sophomore Taylor Smith, who doubled her previous career high with 18 points on 9-of-17 shooting. Smith also chipped in six rebounds and started off a perfect 4-of-4 from the field via her patented mid-range jumper.

“Taylor’s performance is what we see every day,” McPhee-McCuin said. “She works extremely hard. I expect Taylor to be consistent. She is someone that has a great mid-range game. The mid-range game is a lost art. She’s been working on threes as well. Do we need her to play at a high level this year? Absolutely. She’s up for the challenge and really working on it, so I’m happy that she is able to see the results.”

Deja Cage also had a great showing offensively, tallying a career-high 16 points on 7-of-10 shooting in her Ole Miss debut. She was with Ole Miss last year, but had to sit out after transferring from DePaul after her sophomore season.

“Deja is a scoring machine,” McPhee-McCuin said. “16 points in 16 minutes, and she’s out of shape because she had an injury and could have not been back for another two weeks. She worked really hard with her rehab. Once she gets in shape she’ll be even better.”

After missing the 2018-19 season, three-point specialist Torri Lewis returned to the starting lineup without missing a beat. She scored 11 points on 4-of-6 shooting, which included a 3-of-5 performance from beyond the arc – the 27th-game during her time at Ole Miss with multiple threes. In her career, 84.8 percent of all of Lewis’ made field goals have come from three.

Up next, the Rebels remain at home for a Sunday afternoon (Nov. 10) tilt against ULM at 2 p.m. CT inside The Pavilion at Ole Miss.