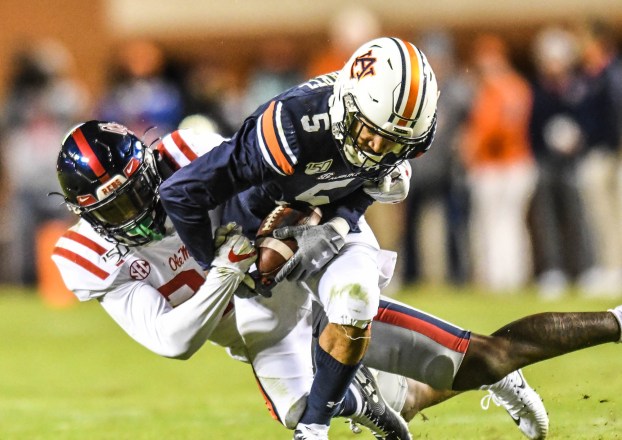 Rebel defense “focusing on us” in preparing for New Mexico State

This week, Ole Miss gets a rare mid-season meeting with a non-SEC opponent.

For the Rebels, the New Mexico State game on Saturday could not come at a more opportune time.

Ole Miss is riding a three-game skid, one that has raised a lot of questions. The good news is that Ole Miss welcomes, statistically speaking, one of the worst teams in FBS football to Oxford this weekend.

“We’ve got a lot of respect for those guys. You respect every opponent,” head coach Matt Luke said on Monday. “They throw it around a lot offensively, kind of like that Washington State, Mike Leach spread, and they do a good job of that. We have our work cut out for us. But the main thing for us is getting back on the practice field and getting to work. We’re focusing on us and going to get better.”

Coming off that three-game skid, Ole Miss certainly has a lot of things to work on. One of those things for the Rebel defense is their pass coverage. That pass coverage is the exact type of thing the Mike Leach-style air raid offense will test out.

Auburn threw for 340 yards on Ole Miss Saturday. One hundred twenty-eight of those yards came on two plays: a 78-yard reception on a wheel route that Ole Miss busted a coverage on and a 50-yard strike on a beautiful throw from Auburn quarterback Bo Nix.

“Their strength has been our weakness,” said defensive coordinator Mike MacIntyre, referring to New Mexico State. “We’re working on pass coverage and making sure we’re in the right spots in all that. We’ve shown signs of getting better at different times, but this is going to put a stress on our defense as much as they throw the football. I’m really concerned about us making sure we’re playing our coverage correctly.”

MacIntyre said he expects this New Mexico State team to throw the ball upwards of 50 times on Saturday. He joked that 75 pass attempts wouldn’t be out the realm of possibility.

It’s just the simple analogy that this team will test the Ole Miss defense’s weakness.

“I told our kids we’re playing Washington State. It’s Mike Leach. It’s his exact offense,” MacIntyre said. “They’ll try to run it some – (Jason Huntley) is a good running back. He’s elusive, but they’ll throw the ball to him a ton out of the backfield, like the Washington State system. That’s what they’re trying to do and I’ll be up late at night scratching my head making sure we’re in great coverage.”

The interesting thing is that this team’s number look nothing like Washington State’s. There’s a reason the team is 0-8.

The Ole Miss offense has a similar target this week of focusing on themselves. As written extensively from Auburn, the passing game has been a problem of late – they also have a good opportunity to get some confidence back in that regard this weekend against New Mexico State.

Friday kicks off the start of high school football playoffs for Class 2A, 3A and 4A – including an at-home... read more