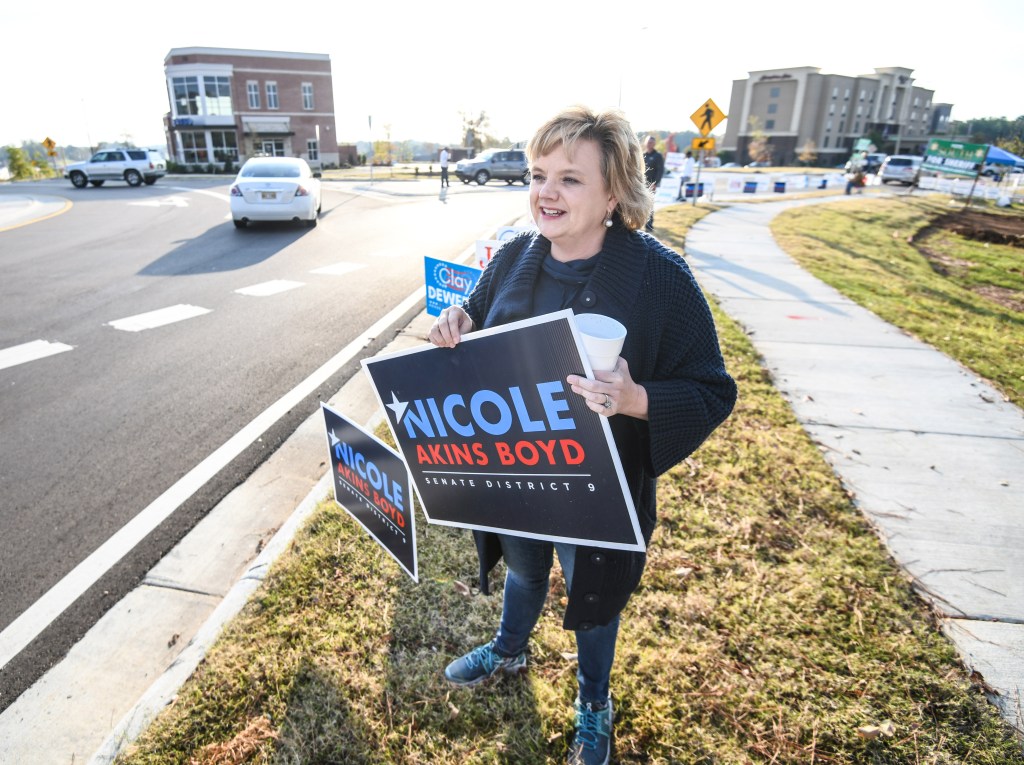 Mississippi District 9 senate candidate Nicole Boyd holds a sign outside the polls at the Oxford Conference Center in Oxford, Miss. on Tuesday, November 5, 2019. Mississippians went to the polls for statewide and county elections. (Bruce Newman, Oxford Eagle via AP)

Boyd defeated outgoing Lafayette County District 1 Supervisor Kevin Frye to claim the District 9 seat in the state senate in Tuesday’s general election. It is a return to Jackson for Boyd, who worked in the state’s attorney general’s office earlier in her career.

“I am so humbled by the trust the Lafayette and Panola County voters placed in me to represent them in our State Senate,” Boyd said in a comment to the EAGLE. “I am grateful for the prayers and the amazing volunteer support throughout this campaign and for the confidence of the voters at the polls yesterday. Thank you, Lafayette and Panola County.”

Boyd’s father, Noal Akins, served in the Mississippi House of Representatives from 2004 to 2012.

In what was touted as one of the closest governor elections in Mississippi’s recent history, the Republican party came out on top.

Republican candidate Tate Reeves defeated Democratic candidate Jim Hood to become the next governor of Mississippi in Tuesday’s general election. Reeves had been leading Hood by only three points in some of the latest polling data heading into Tuesday, but eventually defeated the current state attorney general by more than six percent of the vote and nearly 50,000 votes.

Joining Reeves is fellow Republican Delbert Hosemann, who defeated Jay Hughes by more than 20 percent of the vote. There was talks of a possible split among the top leaders in the state, but Hosemann’s early victory on Tuesday ensured a clean sweep for the GOP in Mississippi.

Other key Republican wins included Michael Watson winning the Secretary of State race over Democrat Johnny DupRee, David McRea winning big over Addie Lee Green to become the next state treasurer and Lynn Fitch replacing Hood as the state’s next attorney general with her win over Jennifer Riley Collins.