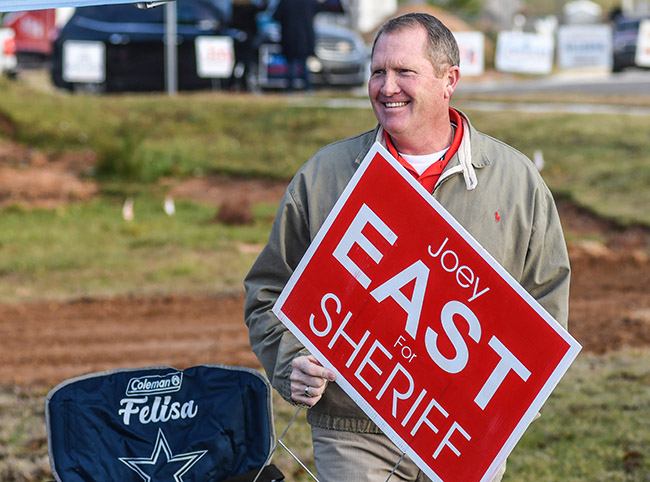 Lafayette County sheriff candidate Joey East holds a sign outside the polls at the Oxford Conference Center in Oxford, Miss. on Tuesday, November 5, 2019. Mississippians went to the polls for statewide and county elections. (Bruce Newman, Oxford Eagle via AP)

The Lafayette County sheriff seat will remain in the East family.

East’s father passed away in September 2018, leaving a void at the Lafayette County Sheriff’s office for the first time since 1972.

“For the ones who voted for me, thank you and I’m going to earn every bit of it,” East said. “It still hasn’t set it in yet. I can’t describe (this year). It’s been a roller coaster. To losing your dad to having a job but trying to run for another one, it’s just been a mountain of emotion.”

There will be no rest for East, who will begin cleaning up his campaign signs on Wednesday then shift his focus over to the sheriff’s department as soon as he can. East will also have to help begin the process of finding his replacement for chief of the Oxford Police Department. East took a leave of absence in January to focus on campaigning, and Jeff McCutchen has served as interim chief the past 10 months.

All of the Lafayette County supervisor races required the results of the 1,400 absentee ballots to determine their outcome. Those ballots were counted last Tuesday night, settling all but one of the five supervisor races.

The District 1 and 2 supervisor seats became vacant with Jeff Busby running for Circuit Clerk and Kevin Frye running for the Mississippi Senate. In the District 1 race, Brent Larson received nearly 59 percent of the vote over Adam Clay to replace Frye. In the race to replace Busby’s seat, Larry Gillespie received 51 percent of the vote over Josh McGlawn for a 130-vote victory.

There are 75 affidavits left to be counted after Tuesday night and they could determine the District 3 supervisors race. Incumbent David Rikard held a 43-vote lead over Dale Timothy Gordon. LaKeisha Borum finished with nearly five percent of the vote and potentially keeping Rikard close to Gordon.

The affidavits will be counted on Wednesday.

The closest Justice Court Judge race on Tuesday was decided by the absentee ballots. Carolyn Pettis Bell held off Andy Arant, taking home 51 percent of the vote and winning by less than 160 votes. Johnny Wayne McLarty and (Southern District) and Mickey Avent (Central District) each won re-election as they ran unopposed.

All three incumbent constables will see another term, with Jack E. Theobald II, Jody Mayfield and Greg “Spankey” Pettis running unopposed in the general election. Busby becoming the next Circuit Clerk was all but a formality as he ran unopposed, as did incumbent county coroner “Rocky” Kennedy.