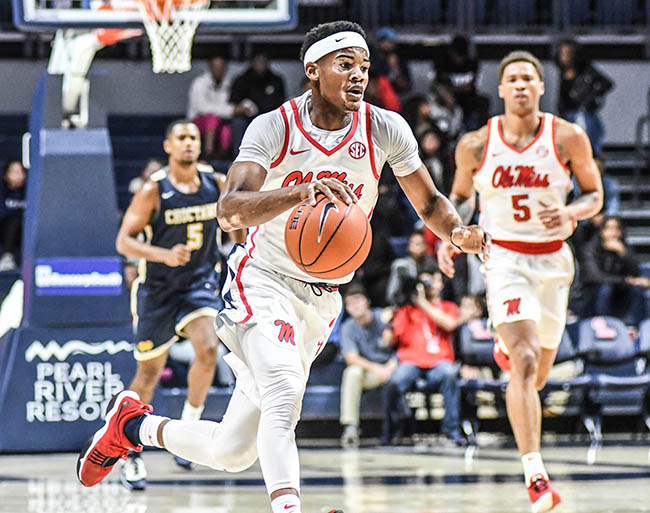 Mississippi's Devontae Shuler dribbles the ball up court against Mississippi College in an exhibition game at the Pavilion at Ole Miss on Monday, November 4, 2019. (Bruce Newman, Oxford Eagle)

There’s no way to look at Kermit Davis’ first year in Oxford as anything but an overwhelming success.

Ole Miss went 20-13 (10-8 SEC) in Davis’ inaugural season, including winning 10 games in the SEC and making an NCAA Tournament appearance for the first time since 2015.

Now in year two, one obvious question lingers as the Rebel season opens on Friday: Can Ole Miss match last year’s success and even take another step forward to redefining basketball in Oxford?

Simply put, the 2019-20 Rebels will look more like an SEC basketball team – that’s coming from Davis himself.

A year ago, Ole Miss played just eight players in most games. One of which, who played in every game and made three starts, was 5-foot-10 D.C. Davis. This year’s team will simply look different. Davis says he plans on using up to even 10 or 11 players per game throughout the season. He doesn’t have an ideal number he’d like to cut the rotation to; in his words, “If you show you can play, you’ll play.”

Last offseason, Davis has talked extensively about what his ideal basketball team looks like. In a lot of ways that utopian team looks a lot like the Warriors of this decade and their ‘lineup of death’ – five long, athletic and relatively positionless players who can switch interchangeably on defense.

This year’s team will start to resemble that team. Ole Miss has eight players on the team who are listed between 6-foot-5 and 6-foot-10, nine if you count Shon Robinson, who is redshirting after reclassifying to enroll early at Ole Miss.

The big men of a year ago were dumped on Kermit Davis. At times, he had no idea what to do in the post, with Dominik Olejniczak’s lack of ability to provide anything offensively and Bruce Stevens’ inability to stay out of foul trouble. Now, Davis has some big men that he’s excited about.

In an offseason sit-down with Davis, he brought up the name Carlos Curry multiple times, unprompted. The team loves what they have in the 6-foot-10 freshman who redshirted last season to get his body and overall skill up to SEC caliber. The team’s other big men come in either young, completely fresh or both. Sammy Hunter comes to Oxford from the Bahamas as a three-star, 6-foot-9 and 230-pound freshman.

But the real big improvement comes in the form of the top JUCO transfer big-man in the country. Khadim Sy, a junior who started his career at Virginia Tech before spending a year in the junior college ranks, is the presumed starter at center for Ole Miss.

There’s a good chance #OleMiss gives minutes to 6 or more players that have never taken the Pavilion floor during a game for the Rebels. Here’s what Breenin Tyree thinks of the new crop of freshmen and JUCO transfers pic.twitter.com/Yd0TRMoZxX

Another guy that factors into the big man rotation is sophomore Blake Hinson. Hinson hasn’t been a full-go in practice since the start of the fall, dealing with what the team has described as a “blood abnormality.” Hinson is yet to participate in any contact drills, but has been a full participant in any non-contact drills for Ole Miss. Davis said if you came by practice, you wouldn’t know anything is wrong with him.

As a true freshman, Hinson started in 31 games for Ole Miss, averaging 8.3 points and 2.9 rebounds. The team has said he won’t play in the season opener on Friday, but they’re optimistic to have him back by late November. KJ Buffen, who came off the bench in 31 of 33 Rebel games last year, will start in place of Hinson until he returns, another guy who’s added a lot of weight to his 6-foot-7 frame (with a much larger wingspan) and simply looks more like an SEC basketball player this year.

Then there’s the guards. Many of these names Rebel fans will know. Breein Tyree returns as a senior, coming off an All-SEC First Team season and having been named this year to the All-SEC Preseason First Team. After a junior season where he jumped to 17.9 points per game, a large portion of the Rebels’ success in this season will come from Tyree’s ability to take another step forward – a big portion of the Rebel offense will run through him.

Tyree’s backcourt mate, junior Devontae Shuler, made one of the largest jumps in efficiency in the country last season, his first playing point guard. After a freshman year where he shot 25.9 percent from three, Shuler leaped all the way to 40.2 percent as a sophomore. With Terence Davis graduated and in the NBA, Ole Miss will be asking Shuler to take on more of a scoring role this season (he averaged 10.3 a game last year), while maintaining that same efficiency.

Joining the two experienced guards in the Rebel backcourt is the team’s top-rated recruit in the 2019 class. Austin Crowley (pronounced like the bird, Crow), is a four-star recruit who chose Ole Miss after recommitting from Vanderbilt in March. He also had offers from Gonzaga and Alabama. Crowley is the Rebels’ highest-signed recruit out of high school since Shuler in 2017. Crowley is going to play a lot of minutes at guard for the Rebels, and may even start.

The likely fifth starter for Ole Miss comes in the form of Louis Rodriguez. A freshman a year ago, Rodriguez saw little playing time. Now, he’s shown the biggest improvement of all Rebels in the offseason. Part two of our Rebel basketball preview coming tomorrow will have more on Rodriguez.

Schedule breakdown and the EAGLE’s predictions

Kermit Davis’s second-year impact on the Rebel program can be seen in part by a look at the Ole Miss non-conference schedule.

This season, Ole Miss has games early at No. 14 Memphis and home for the same Butler team that beat Ole Miss at their place a year ago. They also will play Penn State and then either Oklahoma State or Syracuse as part of the NIT Tip-Off in Brooklyn over Thanksgiving. They then play at Wichita State on Jan. 4, three days before the start of conference play.

Of course, the Rebels need to win conference games. But there’s a good chance those five games against good, non-conference teams will give a good idea of whether or not Ole Miss will be competing for a second-straight NCAA Tournament appearance in the spring. Last year, the Rebels won just one of those big, non-conference games. If Ole Miss can secure a 2-3 or 3-2 record in those five games this time around, they’d be setting themselves up really well for an NCAA bid entering SEC play.

As a whole, the SEC is taking a small step backwards from where it was a year ago. To start the 2018-19 season, the SEC had five teams ranked in the AP Poll, with three inside the top 12. Four more received votes. At the start of this season, the SEC has four teams ranked, with two teams (Kentucky and Florida) inside the top 20. Four additional teams received votes. The league may not be as top-heavy, but it’s as deep as ever.

The SEC got seven teams into the NCAA Tournament a year ago. No conference had more than eight. Realistically, that is the ceiling. The SEC can expect to get six to eight teams into the tournament again in 2020, with six or seven as a much more likely outcome. Ole Miss was projected eighth in the conference in the SEC preseason coaches poll.

Looking at the SEC slate, Ole Miss will realistically need to get to, at minimum, 9 SEC wins to have a shot at the NCAA Tournament. With a 10 SEC wins a year ago, they received an eight seed.

When doing projections, I like to break schedules down into three categories: games you “should” win, games you probably will not win, and either-or games. Games you “should” win are ones against teams of similar caliber at home or any game against the bottom of the conference. Games you probably won’t win are ones, home or road, against the top teams in the conference. Either-or games fall on home or road games against teams of similar quality.

Obviously, this is overly simplistic. A team can win games they shouldn’t, lose games they should win and finish above or below .500 in either or games. Some teams can surprise teams and others could be duds. But it’s a good way of getting a realistic grasp on where a team is at in relation to the conference.

Breaking down the conference schedule in this regard, I count five games the Rebels should win, seven either-or games and six games they likely won’t win. Giving Ole Miss a win percentage of .500 in either-or games would put their conference record at either 8-10 or 9-9 in conference play prior to the SEC tournament.

Kermit Davis is great at exceeding expectations. The 2018-19 Rebels were picked to finish last in the SEC and they turned around and won the NCAA Tournament. For that reason, I’m giving them the over on the 3.5 projected wins in the either-or games and a 2-3 record in the five challenging non-conference games. That puts them at 9-9 in conference and 19 regular season wins. A win in the SEC tournament puts them at 10 conference wins. Not putting an SEC team with ten conference wins in the NCAA tournament would be tough.