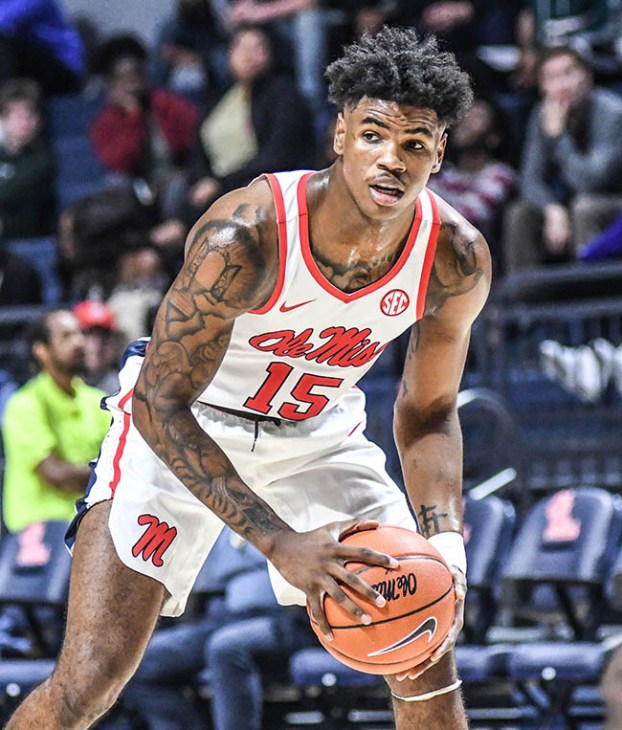 The Rebels’ big unknown: how Luis Rodriguez went from bench afterthought to starter

Luis Rodriguez seemed like a completely different player this week.

The sophomore didn’t speak to media once throughout the season last year. That was in part because he wasn’t playing much, and also partially because he didn’t have a level of confidence to be put into that position comfortably.

This year, sitting in the Tuohy Basketball Center two weeks before the start of the regular season, he was everything that he wasn’t a year ago.

“It’s just taking everything more seriously. Being in the gym and watching film from last year. Looking at what I didn’t do well and working on everything,” Rodriguez said. “Being a freshman and not knowing what to expect versus now being a sophomore, I’ve been through it a full year. You know how to prepare for practice and games and can put everything together that the coaches want out of us.”

Rodriguez committed to Ole Miss as a four-star guard prospect, the number one player in the state of Connecticut. But that freshman year didn’t go exactly as planned.

On a Rebel team that spent all year looking for more bench help, head coach Kermit Davis wanted more from Rodriguez. Yet he played in just 25 games and played a total of 154 minutes over the course of the year, averaging 1.1 points and 1.1 rebounds a game.

It wasn’t the production he expected when packing his bags and moving from Connecticut to Mississippi, but he didn’t quit. Now, Rodriguez is likely going to be in the starting lineup when the Rebel basketball season kicks off Friday.

“A lot of it is just confidence and knowing the offense,” Rodriguez said. “I’m much further ahead this year than last year with just knowing the offense. But having that confidence is everything. It lets me be physical and challenge guys in practice and kind of even push them around to an extent. It’s helped me a lot.”

Ole Miss keeps a unique point totals tab during official practices. The team tracks everything from assists and rebounds to 50-50 balls recovered and deflections. Davis said throughout this offseason and official practices to start the fall, Rodriguez has consistently finished in the top two or three among the whole team.

Davis and this Ole Miss staff have always stressed those practice stats and simply practice competition. As important as games are, that’s where one earns their time.

A year ago, Rodriguez said it was now-graduated and playing in the NBA Terence Davis who would kick his butt and push him around every day in practice. He learned from that how to conduct practice and how to work from Terence Davis. Now, it’s Rodriguez pushing people around in practice.

“We started him in the (closed doors) scrimmage against Texas and if we played today, he’d start again,” Kermit Davis said. “His confidence level is up. His body looks different and he’s physical. He’s increased his athleticism and he practices like he belongs and wants a different role.”

Everything still circles back to that increased level of confidence. From struggling to feel like he deserved to be on the court a year ago to knowing he belongs now, the confidence is the driving factor. Rodriguez says the biggest different fans will see in his game is the scoring. He weighs about 10 pounds more now than a year ago; that combined with increased confidence is allowing him to get to and play around the rim.

On an Ole Miss team that will ask a lot from freshmen the same way the team a year ago did, Rodriguez is a good test case for the young kids. He’s not shying away from the fact that he struggled a year ago – instead, he’s using it as motivation for his younger teammates.

“Those guys come to me, asking me, knowing the type of season I had last year,” Rodriguez said. “They don’t want that kind of season for them. So, they’re just asking me what I’ve done differently. (I’m just) giving them what advice I can for them to have a better year than I did.”

If Ole Miss is going to make their first back-to-back trips to the NCAA Tournament since 2001-2002, They’re going to need to replace Terence Davis’ production. The Rebels aren’t going to replace his 15 points and six rebounds all from one person, that’s the advantage of having the depth they have this season.

However, Rodriguez is the logical candidate to absorb much of that production and take a big leap into his sophomore year. Ole Miss needs that guy who’s dominated offseason and fall practices to step up in the Pavillon.

There’s no way to look at Kermit Davis’ first year in Oxford as anything but an overwhelming success. Ole Miss... read more