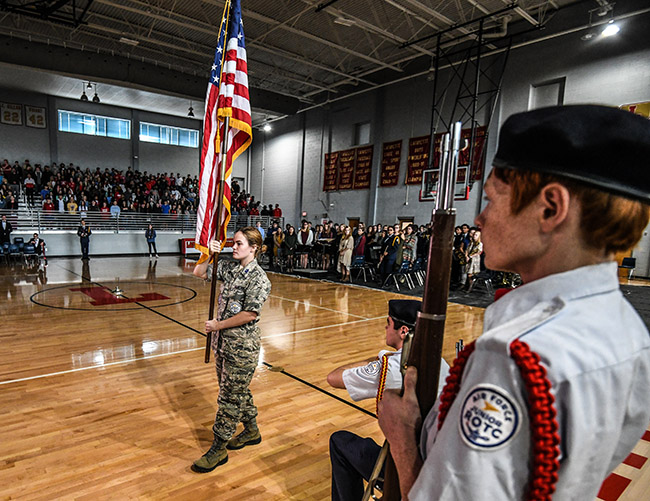 Veterans are a vital part of the LOU Community, and several local organizations and institutions are doing their part to offer thanks for the men and women who served in the armed forces.

This Saturday’s Ole Miss football game against New Mexico State is the Military Appreciation game. A culmination of the University’s Warrior Week festivities, the game will feature multiple salutes to veterans and active-duty service members.

On Sunday, Nov. 10, the David Reese chapter of the DAR and local Girl Scouts Heart of the South Council will gather at 2 p.m. for their annual Flag Retirement Ceremony. This ceremony will take place at the Old Armory Pavilion, located at the intersection of Bramlett Boulevard and University Avenue. Collection tubs for any worn and tattered American flags may be found at The Powerhouse on University Avenue and at the Oxford-Lafayette County Public Library.

Oxford School District will honor veterans who are alumni in a special way on Veterans Day, Nov. 11, at 9:30 a.m. In their honor, their names and branch of service will be displayed at Oxford High School.

The “Veterans Roll Call” is a special tribute to the graduates of Oxford High School, Oxford Training School, Central High School and University High School who have honorably served in our nation’s military.

Also on Monday, the Veterans of Foreign Wars Post 3978 and Auxiliary will host the Veterans Day Ceremonies at the National Guard Armory at 10:30 a.m. This event is sponsored yearly by veterans‘ organizations of Oxford and the City of Oxford.

Some of the featured festivities will be entertainment by the Oxford High School Choir directed by Thomas Ardrey, posting of the Colors by the Oxford City Police Honor Guard. Oxford Mayor Robyn Tannehill will be presenting remarks along with Jeff Busby, President of the County Board of Supervisors.

Master of Ceremonies will be VFW 3978 Commander Greg Lovelady. The Veterans Day address will be presented by US House of Representative Brigadier General Trent Kelly. Special award presentations will be given by veteran Post Commanders from the American Legion, DAV and VFW. Following the retiring of the Colors and benediction by Rev. James Petermann, there will be a special drawing by the Military Order of the Purple Heart.

The invitation to attend is extended to all citizens, veterans and military families of veterans.

Local businesses will also hold Veterans Day specials on Monday, including Gateway Tire & Service Center on West Jackson Avenue. The tire shop will offer free standard oil changes or $25 off any service to all veterans, active military and their affected partners in order to honor their sacrifice. On Monday, all customers who can provide a valid military ID at any of Gateway’s participating retail locations are eligible for this promotion. Details and times are listed online at http://gatewaytire.com/.

Oxford Walk for Diabetes set for this weekend