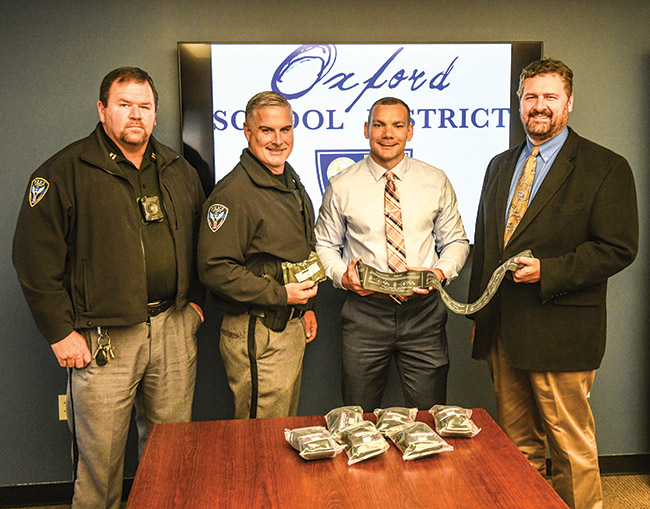 Saying the Oxford Police Department’s annual haunted house was a success would be an understatement.

The 14th annual Halloween event scared up over $8,000, and had a record attendance of around 1,500 people go through the haunted house. Due to that success, OPD was able to afford trauma kits for every classroom in both Oxford and Lafayette County School Districts.

Every year, the haunted house raises money toward a cause, but this year OPD’s Capt. Alan Ivy — who organizes the event — wanted to focus on a more specific need. Ivy leads active shooter training sessions for OPD, and after speaking to so many teachers over the years, and the unfortunate rise in school shootings, said he wanted to make sure Oxford and Lafayette teachers and students would be as prepared as possible.

“We have a way to stop the bleeding before the (emergency medical services) can get there, and it’s with these trauma kits,” Ivy said ahead of this year’s haunted house. “So, it kind of popped in my head that we raise money every year, and these go hand-in-hand with what I teach.”

Mother Nature played a role in this year’s event, with the department having to postpone haunted house on Oct. 25, due to heavy rainfall in the area. That night was rescheduled for Oct. 28 and ended up being the second-most attended night of the three.

The first night saw more than 300 people attend, and the third night had approximately 600. The rescheduled night saw over 500 people.

“That’s a record. We broke the record by a lot,” said interim police chief Jeff McCutchen. “We had a lot of turnout (for the trauma kits). We had a lot of people say, ‘Hey, we love that cause.’ …We were optimistic, but you never know with what’s happening on the weekends. Being multiple (home Ole Miss football) games in a row, then you have an off weekend, you don’t know if people are going to travel. But we also thought that (the trauma kits) being the cause was going to bring a lot of people out.”

Initially, the plan for the haunted house to raise enough money to outfit all, or as many classrooms in the Oxford School District this year as possible, and then outfit any outstanding Lafayette classrooms with the funds raised next year.

The Oxford School District planned to match the amount raised by OPD this year. With that help and the record amount of money raised, trauma kits for every classroom were able to be purchased this year.

McCutchen said the kits, 415 to 420 total, have all be ordered and will arrive in batches. The first group arrived this week, and OPD will deliver them to the Oxford and Lafayette classrooms as they come in.

“We actually crashed the system for the company,” McCutchen said. “They’ve never experienced an order like that. We had 25 come in (Tuesday), and so we’ll get these lump sums that come in.”

During Tuesday’s Oxford Board of Aldermen meeting, McCutchen recognized the efforts of Capt. Ivy in being able to outfit every classroom in Oxford and Lafayette this year.