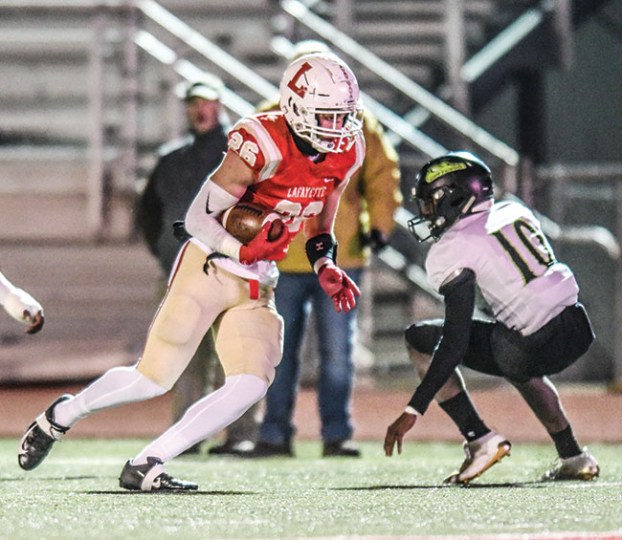 Head coach Michael Fair told his team after Friday night’s game that when they turn on the film, they will see that plays were just not made – those plays made the difference in where Lafayette will play next Friday night.

The Lake Cormorant Gators scored early and held on to knock off the Commodores 20-14 at William L. Buford Stadium on Friday. The Commodores (8-3 overall, 5-2 in Region 1-5A) will now be the No. 3 seed in the region and will have to travel to Lexington to face Holmes County Central next Friday to open the 5A playoffs. Just like last week, Lafayette started off slow. This time, it came back to bite them.

“We had a great week of preparation, but we’ve done this the last couple of weeks where we came out and didn’t play fast from the opening snap. We’ve been able to get away from it, and then we run into a good team tonight,” Fair said. “We started slow and they scored on their first few drives. We did nothing on our first two drives. We have a ways to go. We’re a good football team. They’re hurting, and they should. We still have a chance on the road and tee it up.”

Lake Cormorant quarterback Telvin Amos proved to be a problem for the Commodores all night, accounting for all three of Lake Cormorant touchdowns. His ability to extend plays and finds opening proved too much.

“[Amos] has gotten better each week. They had a good plan and they just made plays. We had guys in position and made us miss,” Fair said. “We weren’t always out of position, he’s a good player that made a lot of plays tonight.”

Amos wasted little time getting points on the board by hitting Roderick Daniels in the flat and racing across the middle of the field for a 47-yard touchdown just two plays into the ball game.

It would get worse for the Commodores after failing to capitalize on a Gator muffed punt. Amos and company converted twice on 3rd down and capped their second drive with a goal line sneak for Amos touchdown on the first play of the second quarter. The score was 14-0 at with 11:56 in the second quarter. Randy Anderson had very little running room to work with during that stretch. For the rest of the game, it wouldn’t get much better.

“They played a lot of man against us and loaded the box to stop the run, but we get that a lot. It opened up a few things for us later on,” Fair said.

Then, Randy Anderson put the Dores back in the game going into the locker room. Anderson converted a handful of third downs with both his arms and legs. Anderson then hit D.B. Bennett for a 14-yard score with 2:41 left until halftime.

The second half featured four straight three-and-outs until Lafayette finally broke through when Tyrus Williams raced to the pylon for a four–yard score to tie the game at 14 early in the fourth quarter. Then, the miscues came.

Williams, while trying to convert on 3rd and 10 with his legs, lost the football and the Gators recovered at midfield. The Gators failed to capitalize off of that with a 39-yard field goal that fell just short. After a pair of punts between the two teams, Lafayette had another chance with 3:09 left and the ball spotted at midfield.

Williams found Aaron Williams wide open for a big gain, but a holding call negated the play. The Dores were faced with 4th and short in Gator territory, but a bad snap allowed the Gators to take over at the 47–yard line with one minute left.

“It just killed momentum,” Fair said. “It is what it is. We have to make plays when we are supposed to.”

After a big pass play to Daniels, Amos later responded with a two–yard score to give the Gators the lead for good with 36 seconds left. A Williams interception would then seal the Commodores’ fate. Despite this loss, Lafayette still has their goal in front of them.

“There is no magic formula to this thing. From now on, it is win or go home. We have a tough road ahead of us, but in 5A, they are all tough.” Fair said. “We’re going to go on the road and give them all we have. If we play like we are capable of playing, we’ll play a few more weeks.”