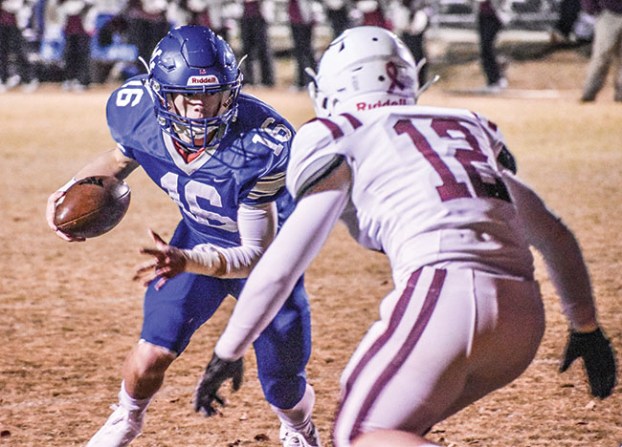 WATER VALLEY – Sometimes, a pair of back-to-back penalties can change the course of an entire football game.

Water Valley got their 3A playoff title defense off to a hot start on Friday night, dominating Kossuth 55-12 to keep their season alive. But a pair of plays early in the first quarter set Water Valley up better than they could’ve imagined.

After the Blue Devils marched down the field to start the game with a quick touchdown, Kossuth answered. A handful of rushes and a big screen pass set the Aggies up at the Water Valley seven yard line with a first and goal to tie. The next play, Kossuth’s Kota Wihite scampered left on a sweep score to tie.

“We’re 1-0,” head coach Brad Embry said. “No one’s really stopped them all year. They’re a good offensive team that has scored points. We had to adjust, and we got that stop and that was big. That got momentum going our way.”

But the play came back, resulting in Kossuth being called for illegal motion and the tying score taken off the board. After the illegal motion, Kossuth was called for a false start and backed up again. A first-and-goal from the seven became a first-and-goal from the 17. On the very next play, Water Valley’s Damicah Hervey intercepted the football, returning the interception 62 yards to set up the next Blue Devil score.

With the outcome in part determined by halftime, scoring slowed in the final two quarters as the pace of play increased.

Kossuth took their opening drive of the second half all the way down to the Water Valley four yard line, their best drive since the drive to open the game. Going for it on a fourth-and-goal from the four, Water Valley held the line.

The Blue Devil lead slowly expanded over the course of the final 24 minutes of play, scoring once each in the third and fourth quarter for the final score of 55-12.

“Just about everything was working, honestly,” Quarterback Jacob Truss said. “We had a great week of practice and we prepared so well for this. We just pounded the ball all night and it opened up the pass.”

Just about everything was working for the Blue Devils in this one. The running game was getting big chunk yards, thereby setting up the play-action and run-pass-option game – one such RPO left Martavious Rockett wide open up the seam for a 44-yard touchdown in the second quarter.

The blowout starting the second half allowed Water Valley to get a few other guys experience. Que Carothers, a freshman who hasn’t played too much this year, scored on a 27-yard touchdown in the third quarter – the only score of the frame.

Ultimately, Carothers would be one of six different Blue Devils to score. Truss accounted for four scores, two on the ground and two through the air to Chance Dewberry and Martavious Rockett. Damicah Harvey and Dre McCray also got into the end zone on the ground.

“I’m proud of how we prepared this week. There’s a lot of pride in that locker room. This year has had a lot of ups and downs,” Embry said. “We always played with good effort but sometimes we didn’t get the job done. But I’m really proud of what we did tonight.”

With the win, Water Valley advances to the second round of the playoffs. They’ll play at Choctaw County next week, who knocked off Ruleville Central on Friday night to advance.

As the air turns brisk, the games start to mean a little more. That’s where we’re at this week. For... read more