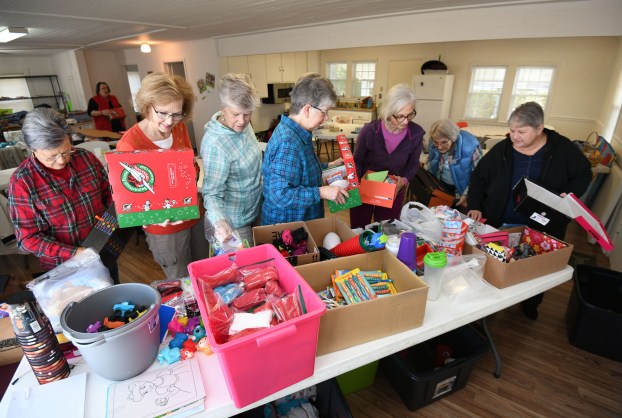 A shoebox may seem like an arbitrary item to many, but those boxes can be used to bring a smile to children’s faces across the world.

A group at Anchor Baptist Church has packaged more than 1,000 shoeboxes full of items as part of the worldwide campaign Operation Christmas Child, which is part of Samaritan’s Purse International Relief. Last year, the church packaged 1,006 boxes; this year’s total topped out at 1,045 boxes.

The organization, founded by Christian evangelist and missionary Franklin Graham in 1970, has a mission of providing spiritual and physical aid to hurting people around the world.

Sidney Faye McCain, Cindy Andrews and Rita Graham serve as co-chairs for the church’s committee and are in charge of packaging the shoeboxes. The boxes include items that children might need, such as toothbrushes and bars of soap, as well as gifts, like dolls and matchbox cars. Each box that goes to a child who is old enough to read also includes a copy of the Bible in their native language.

“We send them to them as a way to open the door for the Gospel as a ministry,” Andrews said. “It has multiple purposes.”

The church works on this project year-round, starting in January. The entire congregation gets involved, donating a different item each month.

Once the church packages the boxes, they are taken to the University of Mississippi’s Wesley Center, which then puts them in bigger boxes to be shipped to one of the organization’s processing centers. This year, the boxes will be going to the Atlanta processing center with a Thanksgiving arrival date.

Andrews, Graham and McCain will also go to the center the first week of December to help sort through the boxes and remove any items that are not allowed through customs. They have previously gone to the Charlotte, N.C. processing center to help.

Through the program, children up to age 14 can receive an Operation Christmas Child shoebox, but most locales are only visited once every seven years. Thus, many children only receive one box before aging out.

“You only get one shoebox in a lifetime,” Andrews said. “What’s so good about the shoebox that we feel so great about is, we know that shoebox will not just reach that child. That child will know about Jesus, and from there that box will reach seven to 10 children.”

One example Andrews mentioned was a child who received a box containing only socks. When the boy was asked if he would like to swap his box for one with toys, he responded by saying he had prayed for socks because his home was very cold. Because of that shoebox, his entire family had socks for their feet as well as a Bible.

Not all the boxes will be sent to children in need overseas. The organization, which receives millions of shoeboxes annually, also keeps some reserved for times of need after disasters that take place in the United States.

This Memorial Day weekend the Nutt Auditorium will be taking a trip back in time as the University of Mississippi... read more