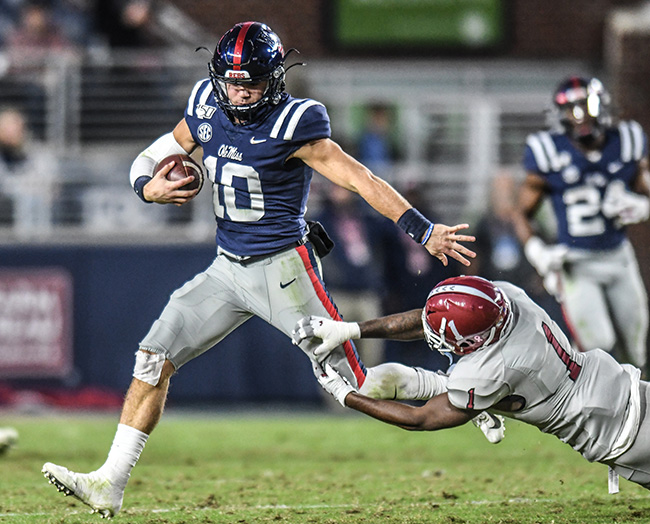 The Rebel coaching staff can say all they want about running a two-quarterback system.

“Coming down the stretch, we’ll need Matt (Corral),” head coach Matt Luke said. “He’s a weapon and we can use him. I think we’ll need him, at some point, to win the next few games.”

But if Ole Miss needs Matt Corral, why aren’t they using him? Right now, John Rhys Plumlee is Ole Miss’s starting quarterback. And at this point, Matt Corral is nothing but a backup who’s usage has gone down every week since the implementation of the Rebel two quarterback system.

Three weeks ago, home for Texas A&M, Ole Miss ran the last remnants in what was the true two-quarterback system that offensive coordinator Rich Rodriguez has raved about. Matt Corral threw 17 passes in that game to Plumlee’s 12, with Corral running four times to Plumlee’s 14.

Since that night, Matt Corral has not played any real snaps as a quarterback.

In the Auburn loss, a game in which Rodriguez said he had plans that never materialized to play Corral in the second half, Matt Corral played in just two drives. He attempted three total passes.

Saturday night in the win over New Mexico State, Corral didn’t the field until the outcome was already determined.

Corral took two snaps in the first three quarters on Saturday to Plumlee’s 54. Corral did not see the field until there was 1:13 remaining in the third quarter with Ole Miss up 31-3. John Rhys Plumlee was having his ankle taped up on the sideline when Corral initially took the field, yet Corral would stay on to complete the touchdown drive and the remainder of the game.

“Today was just a little bit different because we were running it so much,” offensive coordinator Rich Rodriguez said. “We have two starting quarterbacks in my mind, two very capable guys. Matt, I have 100 percent confidence in him, and I told him we’re going to need him going forward. That part hasn’t changed.”

For much of the fourth quarter, when Corral was in. Yet Corral was in was with a handful of Ole Miss receivers and running backs – Isaiah Woullard, Jadon Jackson, Tylan Knight, etc. – that hadn’t played much all year. He wasn’t in as a second quarterback; Corral was in the game as the backup when the game got out of hand.

John Rhys Plumlee was extremely effective on Saturday, yet keep in mind that New Mexico State had the nation’s No. 120 defense out of 130 FBS football teams entering the week. Plumlee completed 11 of 17 passes for 124 yards no touchdowns and no interceptions. He ran the ball 12 times for 177 yards and two touchdowns, breaking the single season rushing touchdown record with seven.

Corral finished two of two passing for 35 yards, one of four quarterbacks that saw the field for Ole Miss.

Two quarterback, one quarterback or no quarterback, Ole Miss is in for the most challenging week of practice they’ve had all year. Coming to Oxford in a week is LSU, the presumptive No. 1 team in the nation after beating No. 3 Alabama handily in Tuscaloosa on Saturday afternoon.