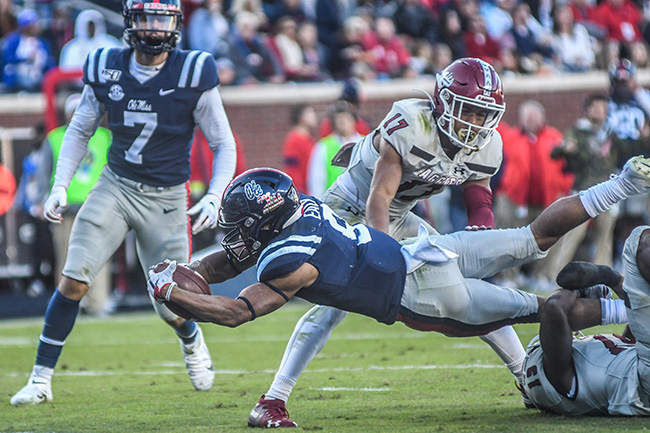 Mississippi running back Jerrion Ealy (9) dives over New Mexico State defensive back Austin Shaw (13) to score in the second quarter at Vaught-Hemingway in Oxford, Miss. on November 9, 2019. (Jackson Newman, Oxford Eagle via AP)

On paper, Saturday’s contest between Ole Miss and New Mexico State was not supposed to be a close game. Playing out on the field, it was not close either.

John Rhys Plumlee and Ole Miss took control from the start in their 41-3 win over New Mexico State on Saturday. The win snapped a three-game losing skid for the Rebels (4-6) and was the team’s first victory since Oct. 5.

The Southeastern Conference’s top rushing attack continued their dominance on the ground with 447 yards against the Aggies (0-9).

Plumlee’s legs did the most damage while also setting a couple freshman records in the process. The Oak Grove product set the single-season rushing yard record on the first play of the game with a 14-yard run. Later in the game, he would set his second Rebel record, surpassing Joe Gunn’s 1998 freshman record with his seventh rushing touchdown of the season. The freshman finished the game with game-high 177 rushing yards and two touchdowns on 12 carries. He also completed 11 of 17 passes for 124 yards.

“(Plumlee) waited and took advantage of his opportunity when it came and he made some plays,” Ole Miss head coach Matt Luke said. “I thought he managed the game well.”

Fellow Freshman Snoop Connor had his first 100-yard game of his young career with 109 yards and two touchdowns on 13 carries. Jerrion Ealy picked up his fifth rushing touchdown of the season to go with 71 yards on 14 carries. Part of the youth movement, all five Rebel touchdowns on the day were scored by freshmen.

Quarterback Matt Corral saw action late in the third quarter and most of the fourth quarter. He finished 35 passing yards on two passes and rushed for three yards on two carries, but was one of just four Rebel quarterbacks to see time in the blowout.

The Rebel defense stifled New Mexico State, holding an offense that was averaging 345 yards per game to less than 200 on Saturday. The Aggies rushed for under 70 total yards .

Ole Miss now turns its attention to their final home game of the season and No. 2 LSU, who is coming off a big victory over No. 3 Alabama. Kickoff is set for 6 p.m. CT next Saturday.

Water Valley blows out Kossuth early in 3A playoff…