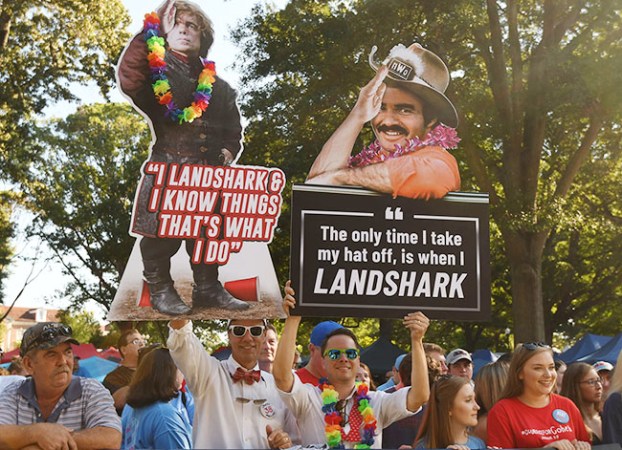 Fans hold signs as SEC Nation is broadcast from the Grove, in Oxford, Miss. on Saturday, September 15, 2018. (Bruce Newman, Oxford Eagle via AP)

SEC Nation coming to the Grove Saturday for LSU vs. Ole Miss

Coming live from the Grove on Saturday morning is SEC Nation, as announced by ESPN and SEC Network on Sunday morning.

The show, based on the format of ESPN’s College Gameday, previews the day’s games from around the SEC, traveling to a different SEC school each week. Host Laura Rutledge will be joined by Tim Tebow, Paul Finebaum, Marcus Spears and others for the live setup in the Grove.

Having been on air since 2014, SEC Nation has come to Oxford five times prior, most recently for No. 1 Alabama in September 2018.

LSU, the nation’s No. 1 team coming into the weekend, knocked off Alabama 46-41 on Saturday in Tuscaloosa. LSU quarterback Joe Burrow is the favorite for the Heisman Trophy, according to Las Vegas oddsmakers.

The Rebel freshman out of Oak Grove continues to surprise defenders with his speed. On Saturday afternoon against New Mexico... read more