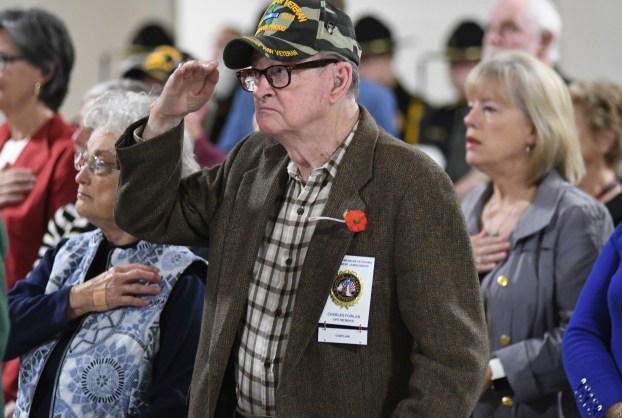 Oxford honored those who fought for their country with the city’s annual Veterans Day Celebration on Monday.

The ceremony took place at the National Guard Armory, adjacent to the Oxford Conference Center, and featured speeches from Oxford’s local and national leaders.

Tannehill took the opportunity to thank her husband, Lieutenant Colonel Rhea Tannehill, who is a veteran and has served as a member of the Mississippi National Guard since 1992. He served a year-long deployment during Operation Enduring Freedom in Afghanistan.

Tannehill also spoke about those who are truly responsible for the freedoms all Americans enjoy.

Kelly, who is also a Brigadier General in the U.S. Army National Guard, took the time to thank veterans who served in World War II, the Korean War, the Vietnam War, the Persian Gulf war and the war in Afghanistan following Sept. 11, 2001.

Kelly also spoke about what it means to be a veteran.

“It means to most people words like duty, honor, country, loyalty, selfless service, sacrifice, integrity. Those are words to most Americans,” Kelly said. “But, those are ways of life for people who choose to serve this great nation. People who choose to sacrifice so that others may be free. It doesn’t matter what generation that you’re in, they continue to volunteer.”

At the end of the ceremony, Commander Greg Lovelady with VFW All American Post 378 in Oxford handed out some special awards.

Kelly was honored with the Award for Distinguished Service. There were two “surprise awards,” as Lovelady called them, which honored two people special to the VFW.

The VFW Americanism Award went to Adelaide Chapman, who is the house mother for the Alpha Tau Omega fraternity at the University of Mississippi. For the past three years, Chapman has placed 3,000 American flags on the lawn of the ATO house in honor of 9-11.

“Nobody has really appreciated her as much as we appreciate you,” Lovelady said before giving Chapman her award.

Mark Hammond was honored with the VFW Veteran of the Year award. Lovelady also recognized Oxford’s Home Depot for helping them apply and be accepted for a grant totaling $11,000 to go toward renovating the VFW Post.

Veteran graduates of Oxford School District will forever be honored in the halls they once walked. The “Veterans Roll Call”... read more