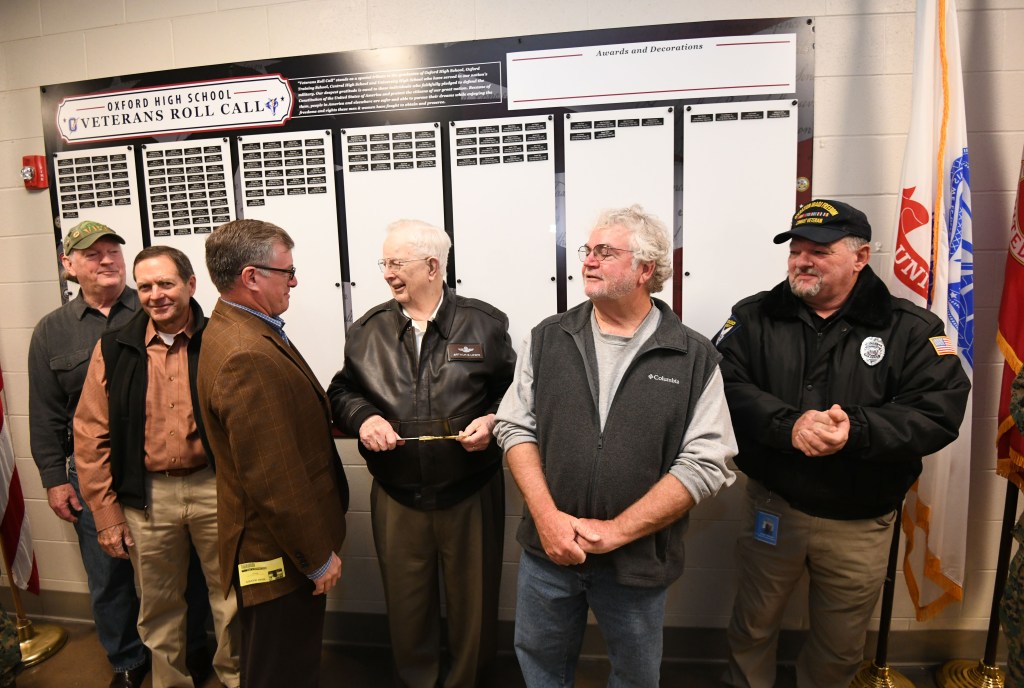 Veteran graduates of Oxford School District will forever be honored in the halls they once walked.

The “Veterans Roll Call” board was officially unveiled at Oxford High School as part of the district’s Veterans Day celebration on Monday.

The board, which was announced by the district on Oct. 22, had a strong response in the weeks leading up to Veteran’s Day. It honors veterans who graduated from Oxford High School, Central High School, Oxford Training School and University High School.

“The price of freedom is high and we cannot afford to forget those willing to pay it,” Oxford school superintendent Brian Harvey said during the ceremony.

An “Awards and Decorations” section is located on the upper right of the board. There, any graduates who have received distinguished honors or top war medals including Medal of Honor, the Navy Cross, Distinguished Service Cross, Air Force Cross, Silver Star, Bronze Star, Legion of Merit and Distinguished Flying Cross.

One veteran, Terry Hawkins, said he viewed the board as a way to pay proper respect to his classmates who offered themselves up to serve their country.

“It’s a great honor to be recognized,” Hawkins said. “A lot of these guys did a lot more than I did in the service. Put their lives on the line. To honor everyone like this, it’s just nice to see all the names and recognize the service of everybody from Oxford and all the high schools. …(It’s nice to see) people that I went to school with. Some that I wasn’t even aware were even in the service.”

Hawkins served in the U.S. Army and earned the rank of Specialist (SPC). He was a member of Oxford’s Class of 1968.

The district will continue to accept alumni names through their application process, which can be found on at oxfordsd.org. The project will be managed and updated by the OHS Marine JROTC students.