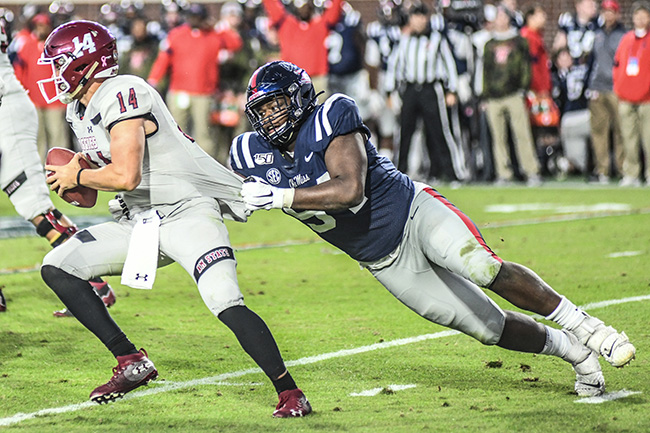 Ole Miss defensive coordinator Mike MacIntyre came to Oxford with a lot of work to do.

The 2018 Rebel defense allowed 36.2 points per game (No. 113 nationally) and 483.4 yards per game (No. 121 nationally). More importantly, they ranked as the one of the nation’s – and the SEC’s absolute – least efficient defenses by SP+, ranking 90th in the country in that metric.

The 2019 Rebel defense is allowing 23.9 points per game (No. 44 nationally) and 396.9 yards per game (No. 71 nationally). In the all-encompassing SP+ metric, which factors in tempo and adjusts for opponents, Ole Miss’s defense ranks No. 37 nationally.

All this said, the Rebels are yet to face the nation’s No. 3 offense. That changes this weekend. No team will be a bigger test of how far the Ole Miss defense has come than No. 1 LSU on Saturday.

MacIntyre brought with him to Oxford a complete scheme change. The 2018 Rebels played a 4-3 front, with four down linemen and three linebackers. This unit flips that, with three down linemen. A big part of why MacIntyre said he likes the system is it creates unpredictability. Rarely will Ole Miss rush just their three down linemen; instead that fourth or fifth rusher on any given play can come from any of the four linebackers on the field. A big part of the defense’s success stems from that – this year Ole Miss has been able to rush the passer.

“We’ve gotten a better feel of what certain guys can do better,” MacIntyre said. “They’ve gotten so much better as the year’s gone on. Coach (Tyrone) Nix and coach (Freddie) Roach have done a great job with those guys. They’ve really listened to him and taken off here in the last couple of weeks.”

Against an LSU team that has the Heisman frontrunner in Joe Burrow, the ability to disrupt the nation’s No. 2 passing attack will be critical for success.

“We’re definitely going to need some pass rush in this game,” MacIntyre said. “Their quarterback, Burrow, does a great job of getting rid of the ball. It’s a lot of quick passes and then they do a really good job of, what I call, max protecting for their big shots. We have to understand that, but we’re going to have to be able to harass him a little bit and get him a little bit off rhythm.”

A problem for Ole Miss in the game, besides the general fact that they’re playing the nation’s No. 1 team, is that LSU’s strength has been Ole Miss’s weakness. As improved as the Rebel pass rush is, their inability to slow down passing attacks – especially in SEC play – has been a struggle.

In four of their last five SEC games, Ole Miss has given up over 300 yards in the air to opposing passers. The only quarterback to be held under 300 was Texas A&M’s Kellen Mond. Still, MacIntyre thinks his secondary – which has played up to three true freshmen at times this year – is improving every week.

Many recent statistical analyses have come to the conclusion that, in the modern boom of the passing game, the opposite of conventional thinking can be true. For years, many thought that an effective pass rush was more important than back-end coverage in slowing down passing attacks. That may have been true a decade ago, but it’s proven false in modern football.

That said, it’s still a symbiotic relationship between the pass rush and the secondary. And for Ole Miss to slow down LSU and Joe Burrow in the passing game, getting after him will only help.

“As our pass rush has gotten better, that helps (the secondary). It kind of like the offensive line. When a quarterback has good pass protection he can see downfield. It goes vice-versa with it,” MacIntyre said. “The kids have worked hard and Coach Clark has been doing a good job with our recognition of routes and how to stay close. Then they’ve gotten more comfortable understanding our scheme and knowing where their help is and where their help isn’t.

“Sometimes, you can’t always cover everything. But if you know where you’re going to funnel it to and where your help or leverage is, that’s a big key in making one or two plays in a game which can be the whole difference in a game.”

LSU comes into Oxford having just beaten No. 2 Alabama in Tuscaloosa in relatively convincing fashion. Burrow is a favorite to win the Heisman Trophy, but is having a season that may land him statistically among the best in SEC history. With three games remaining, and a potential fourth in an SEC Championship game, Burrow needs 12 touchdowns to break the SEC single season record of 44. If he maintains his pace of 355 passing yards per game, and LSU plays in the SEC Championship, he’ll break the single-season passing record by nearly 400 yards.

There’s a reason LSU is a 21-point favorite as they come to Oxford this weekend – they’re the best football team in the country. But if Ole Miss has any shot at upsetting the Tigers and slowing down the Heisman frontrunner, they’re going to rely on the improved pass rush to put Burrow in to the dirt.