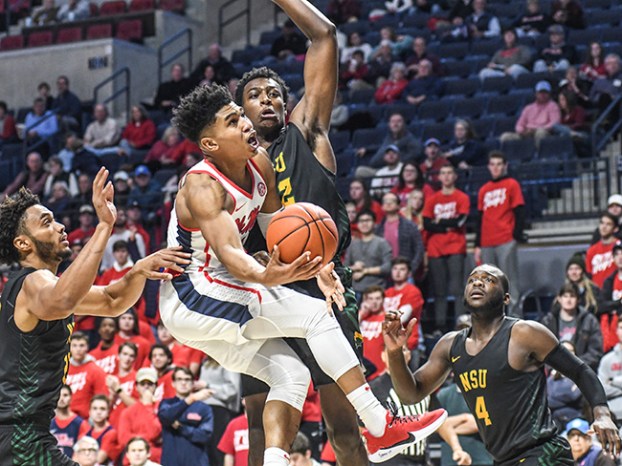 After a sluggish start in the season-opener, Tyree, the Rebels’ All-Southeastern Conference guard, helped them power through some early offensive struggles with 12 first-half points. The Spartans led for a good portion of the first half before a 14-5 surge from Ole Miss to close the half gave it a 40-35 halftime lead.

“I thought changing from our 1-3-1 into our 2-3 zone was the difference,” Ole Miss coach Kermit Davis said. “That was really the first time we have had to go to it. It slowed things down. They couldn’t drive the ball on top of us like they were able to in the first half.”

Norfolk State kept the game at arm’s length and trailed by five with just over 10 minutes to play, but a 13-5 run by the Rebels over the next six minutes put the game out of reach. Sophomore K.J. Buffen had a career-high 23 points of his own and grabbed eight rebounds. Seven of his points came in the second half on 7-9 shooting. Buffen has had a strong start to this sophomore campaign and is flashing an improved offensive skillset.

“I am a lot stronger in my second year, so it is just easier,” Buffen said. “I am more comfortable out there.”

The Rebels held the Spartans to just six points over the final seven minutes. Norfolk State’s backcourt tandem of Joe Bryant and Jermaine Bishop led the Spartans in scoring with 11 points apiece.

Tyree rectified a six-point performance on 2-of-9 shooting in the Rebels’ season-opening win over Arkansas State. Head coach Kermit Davis though Tyree settled for a lot of jump shots in that game and Tyree did a much better job attacking the rim against the Spartans. He was 8-of-18 from the field and 2-of-8 from three-point range.

“He has to be who he is,” Davis said. “He is really good on the move. He has been settling. He needs to get to the rim in transition. I knew he would be better tonight.”

The Spartans suffered their first setback of the season and fell to 2-1.

Ole Miss moved to 2-0 on the season and closes out a season-opening four-game homestand against Western Michigan on Friday and Seattle on Tuesday. The scoring the Rebels are getting from their backcourt between Shuler and Tyree, along with the emergence of Buffen as an offensive threat in the high post, bodes well for the Rebels as they await the return of sophomore forward Blake Hinson, who has been sidelined with a blood abnormality and is expected to be cleared to practice with contact within the next week.

Ole Miss defensive coordinator Mike MacIntyre came to Oxford with a lot of work to do. The 2018 Rebel defense... read more