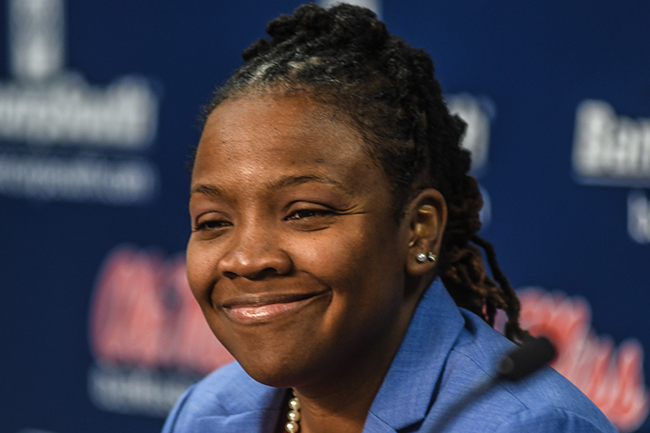 Yolett McPhee-McCuin is introduced as the new Mississippi women's basketball coach during a press conference at the Pavilion at Ole Miss, in Oxford, Miss. on Friday, April 6, 2018. (Bruce Newman, Oxford Eagle via AP)

In spite of early results, the turnaround of the Ole Miss women’s program was evident on Wednesday.

Ole Miss and “Coach Yo” signed the nation’s No. 9 recruiting class on Wednesday’s National Signing Day, highlighted by a pair of five-star signees.

Madison Scott is the nation’s No. 13 overall ranked player and the second-best wing recruit in the country. A 6-foot-1 forward from Maryland, Scott chose Ole Miss over UCLA, Miami and Florida State.

“When we found out that Madi will be joining the Rebel family, we were speechless,” McPhee-McCuin said. “When I first began the process with her, I told my staff that it would be highly unlikely that we get her, but it just goes to show that because we worked hard and believed in what we’re doing here that good things can happen.”

Jacorriah Bracey, from Drew, Miss., rated as the nation’s No. 48 overall recruit and the 11th-ranked guard. Signing Bracey makes the second year in a row that Ole Miss has landed the top recruit in the state of Mississippi. In her career at Tomas E. Edwards high school, Bracey has averaged over 30 points per game and six assists.

Rounding out the Rebel class is three-star recruits Snudda Collins, from Brookhaven, Miss., and Caitlin McGee, from Jacksonville, Fla.

Ole Miss’s class ranks No. 9 in the nation and the top class in the SEC, edging out Kentucky at ten.

“It is my hope that this class shows the type of talent we’d like to bring here to Ole Miss for years to come,” McPhee-McCuin said. “What excites me the most is not the talent that these ladies clearly have, but more importantly the type of people that will be representing Ole Miss here in Oxford and nationally.

“My staff has worked extremely hard to help put this class together, and I’m truly excited about it. We’ve got size, length, athleticism, skill and talent that will help us progress toward the goal of becoming a prominent program in the SEC.”