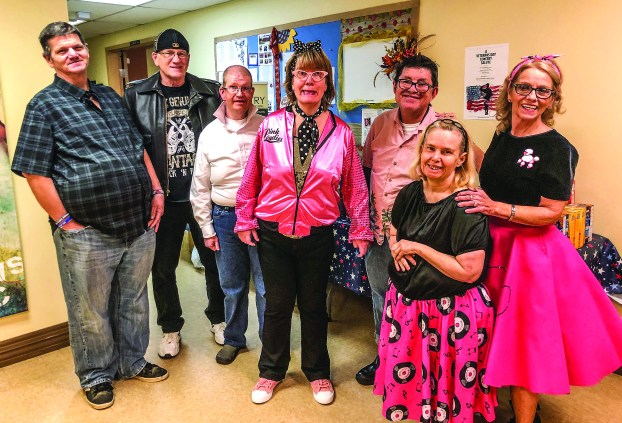 Members of the SAFE Group collected more than 100 food items for The Pantry at their annual sock hop on Friday, November 8, 2019. (Anna Guizerix, Oxford Eagle)

Self-Advocacy For Everyone (SAFE), the premier social empowerment organization for adults with physical and intellectual disabilities in the LOU Community, hosted its annual Sock Hop last Friday night.

The event, which was held at Saint Andrew’s United Methodist Church, was designed to promote social activity and peer integration for special needs adults in the area, with people traveling from as far as Bruce and Calhoun City to attend. Many attendees hadn’t been to one of SAFE’s events before, but said they’re looking forward to the next party.

“This was my first time (going to a SAFE event),” first-time Sock Hop attended Chris Aven said. “(My friend) was talking about it, and I decided I wanted to come. The dancing is so fun.”

Partygoers dressed in their best 1950s-inspired outfits, and brought in donations for a good cause: The Pantry in Oxford.

Dawn Dziduch, who started the local SAFE group with her husband Steve, their daughter Tina and other volunteers, said events like the gala provide many opportunities for those in the adult world with special needs.

The event wouldn’t have been possible without the support of their church, she said.

“SAFE is hosting this, as well as St. Andrew’s ministry for special needs adults, which I’ve taken a leadership role in,” Dziduch said. “Last year, since we saw Tim Tebow was coming with his formal event (Night to Shine), we decided to do a Sock Hop instead, and host it as a benefit.”

Dziduch’s daughter, Tina, was in attendance, dressed as a Pink Lady and manning the entrance table to organize Pantry donations as they came in.

Tina is a member of SAFE’s “Core Four,” one of the first individuals in the group and one of the most active.

“I love to see my friends, and dressing up for the Sock Hop,” Tina said. “And (I’m glad) we were able to help The Pantry.”

Michael and Beverly Danahy were in attendance as well, representing The Pantry. Just last week, word went out that The Pantry was in dire need of several items and monetary donations.

As winter approaches, more and more families look to the organization for help, Beverly said. Since the organization’s goal is to feed a family for a week, expenses can pile up over time.

““What I’ve seen (sock hop attendees) collect is a lot – however, it’s about enough for half of one day,” she said. “Last Wednesday, for instance, we had 110 families and they all walked out with four shopping bags. At any time, there isn’t any one thing they need, but what they do need is monetary donations. Every week, it costs about $10,000 for things like milk, flour, oil, corn meal. They have to buy that locally.”

In addition to its annual Sock Hop, SAFE also hosts a weekly bowling league, Let it Roll, at the bowling alley in Oxford. Now in its fourth year, Let it Roll boasts more than 120 participants from five counties.

To learn more about SAFE or The Pantry, visit the organizations’ respective Facebook pages.