Staying Grounded: All eyes on JJ Pegues ahead of Playoffs 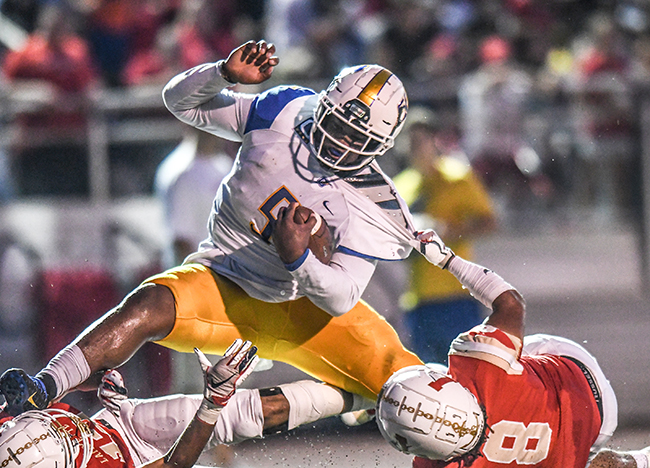 JJ Pegues doesn’t take everything seriously – he can sense the moment, he can be serious when he needs to be.

But for the most part, the Oxford senior still has the “chubby, fat kid” energy, the phrase his father uses to describe younger Pegues.

He may be the top tight end in the state, with multiple SEC schools fighting for his services on the next level, but right now, he’s just having fun.

Earlier in the season, Pegues suffered a minor foot sprain. He wore a boot for two weeks and missed a little over a game of playing time. In the end, the injury ended up being a minor issue, just something that caused him to miss some practice and a game. Early October at the time, the 6-foot-2, 280-pound Pegues walked around practice with a sandal on one foot and a precautionary boot on the other, athletic shorts and a Nike ‘Just Do It’ t-shirt.

While the weather dipped into the low 60s and teammates donned sleeves while running, Pegues was comfortable in his t-shirt. As a joke on the sidelines of practice, Pegues and his cousin Dude Person, were trying to see how many footballs they could catch and keep on their bodies at the same time. Person got five. Pegues nearly got to eight before the one-handed catches couldn’t work and the balls came tumbling to the ground.

“I’m just having fun. This means a lot to me. Just being able to play high school football with these kids, a lot of them I’ve been playing with since little league, I’m just having fun and knowing that at the next level it’ll be tougher and more serious,” Pegues said. “We just want to enjoy the rest of the season and have fun. We don’t know when it could end. And something else could happen in our lives (that’s) not football, so we just have to enjoy it and live it up.”

This is kind of how he’s always been. As a child, his father Jerry Pegues said, JJ was always trying to be a comedian. He was the outgoing child who always wanted to crack jokes and make people smile.

What practice looks like when you can’t practice. Just a minor foot sprain for JJ Pegues. Coach Cutcliffe said they’re just giving him a precautionary day and that they’re not super worried about it pic.twitter.com/BqncXe4nNi

At seven years old, JJ was with his mother Allison driving down West Jackson Avenue – and she was speeding. Jerry said that he had always told JJ, “If you get pulled over and see two police cars show up, someone is about to go to jail.” As law enforcement officers do on a regular speeding stop, they collected Allison’s license and went back to the car. At that time, a second police car pulled up. That’s when things got interesting.

Young JJ, seeing the second car pull up, slowly opened up the car door, getting out of the car with his hands in the air and back to the police officers. Having clearly done nothing wrong, he slowly walked to the back of the car, got on his knees and turned to the cops to plead his innocence – the whole time, there was a smile on young JJ’s face. The officers started to laugh, and let Allison off with a warning to slow down.

“I didn’t know what I was doing. I was scared in the moment. I just got out, not really thinking,” JJ said, recalling the moment. “Man, I haven’t thought about this in so long. The police officer was just looking at me like ‘Is he alright? What’s he doing?’”

In a lot of ways, the four-star recruit who’s narrowed his college football offers down to Alabama, Auburn and Ole Miss, is that exact same boy from nearly a decade ago.

In his first practice, playing for the Oxford Buccaneers, the coaches put everyone from seven to 12 years old in a big circle to do tackling drills. JJ was the first of the seven- and eight-year olds to be called out to work. His father recalled him looking nervous. Remember, this is “chubby, fat” JJ Pegues, not the man we know today.

“That day, he didn’t do as well as I thought he would,” Jerry said. “The next day, JJ and my nephew, Dude Person, went out in our backyard and I taught them how to tackle. They were going at it, him and Dude. Next time they went to practice, he was hitting. He was knocking everybody out. That’s when I noticed he had something in him, we had something here.”

Jerry laughs when asked who is better, him or his son? Later in his high school career, Jerry suffered a relatively major knee injury, one that dissipated much of his Division I interest.  It hurts him a little to admit that JJ, right now, is a better football player than he was as a senior in high school. But don’t worry – he made sure to mention that the college version of Jerry is better than current JJ.

Throughout youth football, JJ Pegues was a defender. He started at linebacker and played some defensive line as well. It was Oxford Middle School coach Steve Herring who saw his size and moved him to offense. Now, JJ jokes that he’s capable of playing on the defensive line, but honestly, he just likes scoring touchdowns.

It’s something Oxford High head coach Chris Cutcliffe struggled with from time to time – where to use JJ Pegues? This year, he’s lined up primarily as a tight end, but the team uses him occasionally as a running back, primarily in their heave formation they call ‘cannonball.’ Through 10 games his senior season, he’s scored 10 touchdowns out of that cannonball formation.

That cannonball formation has been part of the Oxford bread and butter this year. It’s always there, in Cutcliffe’s back pocket, when the team needs it. A few weeks ago, trailing Horn Lake 0-7 in the second quarter with the offense opening the game with offense opening the game with four straight punts, they turned to that heavy package – essentially using Pegues as a wildcat quarterback. He scored the only two Charger touchdowns out of that look for the Oxford 14-10 comeback win.

“He’s an awesome kid. He’s an incredible leader and he’s a servant leader – he does so much for his teammates,” Cutcliffe said. “JJ is so humble. I’ve never had to keep him grounded. He works hard, but he likes to have fun doing it. It can be the fourth quarter of a close game, he’ll be the same way: calm, cool, collected and maybe even some jokes. That’s just his personality.”

Pegues has also taken a few defensive line snaps this season, having recorded a sack and two tackles for loss. But ultimately, JJ Pegues is a tight end. Throughout the recruiting process, there were schools that wanted him to play defensive end or outside linebacker. However, most, including the schools he’s narrowed his short list to, want Pegues where he wants to play – his father’s position, tight end.

For an outgoing, energetic kid like JJ is, he actually doesn’t like talking about himself that much. During the recruiting process, he said he doesn’t like answering phone calls or responding to texts from recruiting coordinators – Jerry handles that side of it now. The Pegues’ were on the sidelines in Tuscaloosa last week for the LSU-Alabama game. Over the next three Saturdays, he’ll take his official visits to Auburn, then Alabama again, and finally, Ole Miss.

“I’ve been doing most of the talking for him, really,” Jerry said. “But we just want him to go wherever his heart is. A lot of people like to talk about family, to make it sound good, but he really is that kind of guy. If he feels like he’s close to some of the players going there or are already there, that’s big on him. He doesn’t want to be anywhere where he’s an outcast, has no one he can hang with after games and joke around with.”

Right now, JJ’s eyes are set on Friday night and Warren Central, Oxford’s first-round playoff matchup. The team hasn’t been shy about the goals for the year – it started with a regional title, something Oxford clinched last week for the first time since joining 6A, and ends in a state championship. But while JJ’s eyes are set on the playoffs, eyes from Tuscaloosa to Auburn to his hometown team Ole Miss, just miles down the road from where he grew up, are set on JJ Pegues and his Dec. 18 decision date.