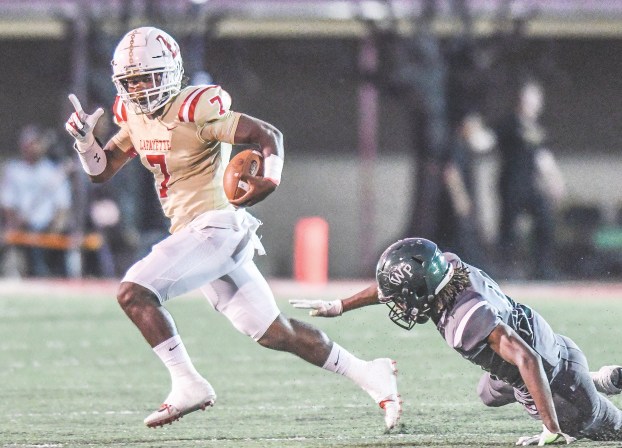 Randy Anderson is always yes-sir, no-sir – it doesn’t matter how often you tell him to call you by first name, it’s still going to be yes-sir, no-sir.

Lafayette High School’s star quarterback may be the best player in 5A football this year, but he’s also arguably one of the nicest and hardest-working players on the Commodore team.

Catching up with Anderson on Monday evening, in a practice commencing through a steady downpour of rain and temperatures dipping into the 40s, he was his same jubilant and respectful self. When asked what he was going to do when he gets home, he didn’t hesitate. Anderson was headed home to run wind sprints with a parachute strapped to his back in the cold rain.

There’s a reason Anderson is having a monstrously impactful senior season for the Commodores. As head coach Michael Fair saw when he first noticed Anderson as a middle schooler, the player has immense talent and speed, but his work never seems to let up.

“The first time I saw Randy, I had just gotten hired here, probably in the spring of 2016 and they’re playing in the eighth-grade spring jamboree at Tupelo. I had just gotten hired, so I wanted to go watch the young kids play,” Fair said. “I knew that day we had something special. It wasn’t size; it was his demeanor – nothing really gets to him and he never gets flustered. His effort was unbelievable and it looked like he was moving in slow motion and nobody could touch him. He just kind of glides, and he’s still got that.”

It was Fair’s first glimpse of what he would now refer to as his “swiss-army knife.” Anderson was playing quarterback in that eighth grade game, the position he still plays more than others.

There are very few positions in which Lafayette hasn’t tried to play Anderson. He’s played fullback, tailback, inside and outside receiver, cornerback and safety during his time as a Commodore, all in addition to his primary quarterback position. The only place Lafayette hasn’t really ever tried him out is at offensive or defensive line, yet Fair jokes that he could still probably  pull those off as well.

“When SEC schools were here last year recruiting Brandon Turnage, I would ask every one of them: ‘I want you to tell me at halftime what (Randy Anderson) is.’ I knew what he was for us, but what does he translate best as at the next level,” Fair said. “It’s funny, because we would have five or six SEC schools in here, and they’d all give me a different answer. Slot receiver, running back, wildcat quarterback in a sense, but for most it’s a running back.”

The University of Memphis likened him to their starting running back Kenny Gainwell. Listed as a running back, Gainwell has 1,067 rushing yards this year, but lines up in the slot a good bit as well, also receiving 454 yards.

Anderson still glides in the way that his head coach saw during that game as an eighth grader. Eighth-grade talent doesn’t always translate to high school football – as Fair says, it helps when your most talented player is one of your hardest workers.

However, there’s no skirting the senior’s talent. You can see it on just about every play he’s on the field – Anderson knows he’s always the fastest person in a game.

A year ago, Anderson’s junior season, Lafayette had two senior running backs run for over 1,200 yards a piece. Anderson got his that year, but when those two graduated, it put even more on his plate entering his senior season. This regular season, Anderson ran for 1,389 yards and 18 touchdowns, adding 446 yards passing. Twice he broke his own single game rushing mark, settling it with a 272-yard, three-touchdown performance against New Hope.

Yet at times, the coaches challenged Anderson again.

At the start of the 2019 season, Anderson dealt with a hip injury, one that would cause him to miss most of the season opener and be limited throughout the opening portion of the schedule. Replacing Anderson at quarterback in those early games was sophomore Tyrus Williams. Now, with Anderson healthy, Williams still gets some quarterback snaps. However, instead of being bitter about handing the ball off to a sophomore and moving out to receiver, Anderson said he sees it as an opportunity.

“Tyrus coming in, puts a little more motivation in the team,” Anderson said. “With me at slot receiver, and knowing you have a great dude coming in to play quarterback, that helps us a lot.”

Fair said Anderson is Williams’ biggest fan. Early in the season, when he was sidelined with the hip injury, it was Anderson as the first to greet the young sophomore as he came off the field and help him try and get better for the next series. It’s just a glimpse inside the mindset of that same, grounded, yes-sir type of player that Anderson is.

And in a way, that same way Anderson is with Williams, so is the Lafayette head coach with his senior quarterback. Anderson’s mother, Sharon Booker, raved about the head coach and the impact he’s had on her son’s life.

“Coach Fair has been awesome for Randy. He’ll stay on top of him. He kind of looks like Randy as a father-type role – if Randy needs anything, he goes to coach Fair,” Booker said. “I’ll call up coach Fair every once in a while, and just let him know how much he means to us, the impact he has on our lives through football.”

Anderson said he models his game after two NFL players, and fans can see both in him when he takes a snap. His favorite running back is Le’veon Bell. Known for his patience behind the line of scrimmage, Anderson has that same bounce and patience when he takes the ball on a designed quarterback run.

As a quarterback, he looks at Lamar Jackson. The 2016 Heisman trophy winner is one of the frontrunners from the NFL MVP award through the opening 10 weeks of the season, and he’s the most dynamic combination of running and passing from the quarterback position the league has seen in years.

“Every kid has someone they like watching as they’re growing up,” Anderson said. “For me, coming into high school, Lamar Jackson was the guy. He was incredible, coming out of high school and into college. That’s what really made me want to play running back.”

A week ago, Lafayette just needed a home win in their regular season finale to clinch a home playoff game. Anderson rushed for 129 yards in the 14-20 loss to Lake Cormorant. That 129 yards sounds good, but he did it on 32 carries. His 4.0 yards per rush was the only game this year, since he’s been fully healthy, that Anderson was held under 6.3 yards per rush.

Fair described the feeling after the game as somber. Anderson said it was the most quiet postgame locker room of the year, something that opened their eyes. Both said that feeling has fueled what has been the best week of practice for the Commodores all season. Going on the road to Holmes County Central to start their 5A playoff run on Friday, the Commodores are going to need every bit of that practice week, and they’re going to need Anderson to continue to be the fastest guy on the field.

No one expects high school athletic departments to spend the money required to be completely original.  Universities will spend millions... read more