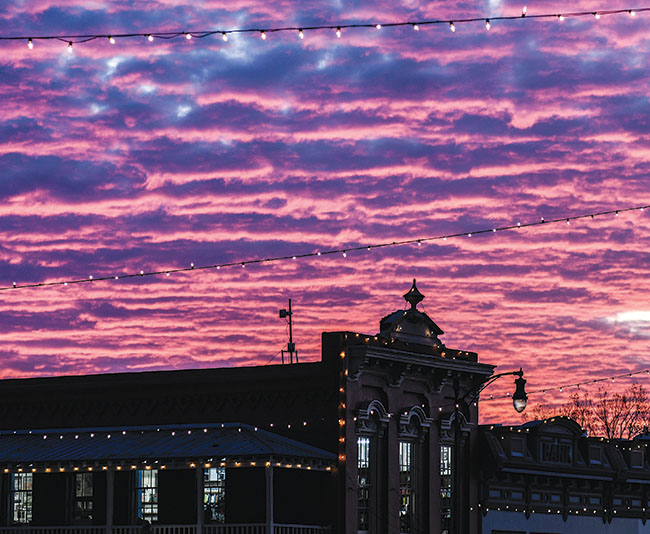 The Canopy of Lights decorations on the Square were turned on in Oxford, Miss. on Thursday, November 14, 2019. (Bruce Newman, Oxford Eagle)

The most wonderful time of the year is fast-approaching, and Oxford is bringing back a few old traditions this holiday season.

Returning last year after an absence, the Downtown Square’s Canopy of Lights is back this year with a lighting ceremony that took place on Thursday. The idea to bring the lights back came from Oxford Mayor Robyn Tannehill seeing old photos of the Square at Christmastime when the Canopy of Lights was a prominent feature.

Through the city’s research, they learned the canopy dates as far back as the 1960s and the original canopy featured orange, green, red and blue lightbulbs that were regular-sized and not the small lightbulbs that are used today. When trying to recreate that same imagery with the canopy’s revival, the City ran into some issues.

“While researching our options, we discovered that these larger, colored bulbs would overload today’s infrastructure,” Tannehill said in a statement. “For this reason, our canopy features white LED lights. We worked hard to find a lovely white light that does not have the overly blue glow that is present with some LEDs.”

The City Buildings and Grounds Department, along with the Oxford Fire Department and Oxford Utilities, worked to try and get the canopy installed this week prior to SEC Network’s SEC Nation show in town this weekend for Ole Miss’s football game against No. 1 LSU and the anticipation of large crowds on the Square.

“We hope that our citizens and visitors alike will take the opportunity to come to the Square and enjoy the view!” Tannehill’s statement read.

The canopy is not the only former holiday tradition the City of Oxford is bringing back. For the first time in 10 years, the downtown water tower will be lit up by Christmas lights. The City determined through old photographs and any memories of people who could remember that the tradition with the water tower began in 1994. In 2009, the City ended the tradition due to many needed repairs.

“As Oxford grows, we continue to find ways to take our cherished traditions and turn them into new experiences,” Tannehill said. “We’ve heard many stories of how people knew they were home for the holidays when they spotted the lights on the water tower from Highways 6 and 7.”