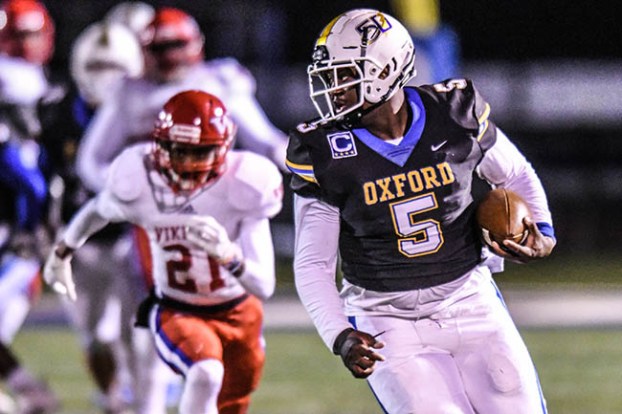 Interceptions told the course of the early game, until JJ Pegues and John Meagher connected for a long one to break things open for the Oxford High School Chargers.

Early moments of Oxford’s first round playoff game were sloppy. Both teams turned the ball over early in the opening frame before Oxford was able to convert and pull away for their 33-14 win over Warren Central.

Oxford opened the game going three and out offensively. Then the defense made their mark. The opening Chargers three and out set up Warren Central with great field position. Later, facing a 4th and 1, the Oxford defense made a stop that would prove larger than anyone would imagine early in a playoff game.

The very next drive, backed up in a third and long in a stalemate of a defensive game, Oxford and quarterback John Meagher turned to the team’s secret weapon. Running a drag route right to left, Meagher hit tight end JJ Pegues just seven yards past the line of scrimmage. Running through one tackler and using his speed to get up the left sideline, Pegues galloped 74 yards for the touchdown.

“I saw a touchdown,” Pegues laughed. “Green grass. I just had to get there. Really though, our defense was great. They forced the runovers and gave us the chance.”

As it has been a factor all year, special teams seems to take an extra step forward in importance as postseason hits. On Friday night, the Oxford kicking game wasn’t a secret weapon – it was simply a weapon.

After the Pegues touchdown, Chargers kicker Jack Tannehill hit from 48 yards on the ensuing possession, extending the Charger lead to 9-0 (they failed to convert a two-point conversion after their opening touchdown). He then hit from 38 yards to extend the Oxford lead to 12-0. By halftime, another Pegues touchdown, this one on the ground, gave Oxford the 19-0 lead.

The Oxford defense had controlled the game since the opening drive 4th down start. They opened the second half on the same note, forcing a three and out. Meagher had his own answer. Driving into the Warren Central half of the field, Meagher looked at a 3rd down and 11, taking a quarterback draw straight downhill for a 26-yard touchdown, putting Oxford up 26-0.

Warren Central came to Oxford having averaged over 17 points per game in one of the toughest divisions in MSHAA. The Oxford defense held them to 0. After the opening drive of the game, the chargers didn’t allow Warren Central past midfield in the second and third quarters, simply a dominant performance.

“We had a great week of practice. We prepared insane,” linebacker Tristian Shorter said. “People on social media said we’re not good enough because they played bigger teams. We  went harder in practice because of that. Our defensive line played great and our inside linebackers stopped the run and then they started passing. That gave it up.”

Warren Central’s largest play in the second half came on a fake punt that netted 18 yards, an impressive right-to-left sweep to get into Oxford territory to start the fourth quarter. They would never get closer until the game was well out of reach. The Vikings scored a drive later for the first time, a 49 yard pass to the tight end off a read-pass-option to cut the Oxford lead to 33-7, but it was too little too late. They would complete a 71 yard touchdown with under three minutes to play to pull to 33-14.