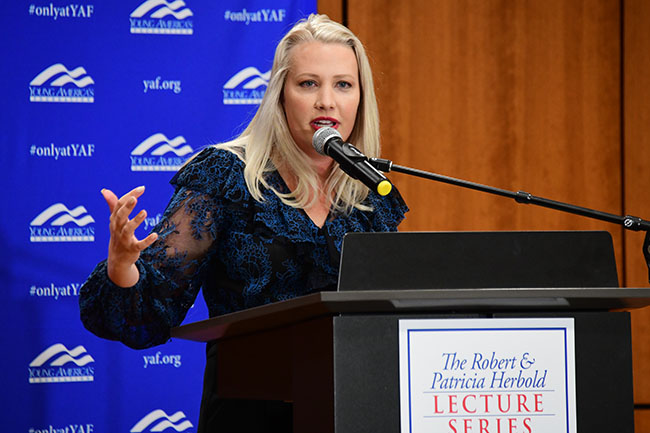 Conservative speaker Elisha Krauss lectured at the University of Mississippi Wednesday night to a filled-to-capacity auditorium, sharing her thoughts on freedom of speech, the victim mentality and social justice warriors.

The event, sponsored by conservative student group Young Americans for Freedom, was the subject of controversy over the last week, after the group was informed it could not host the lecture in its original location, the Overby Center for Southern Journalism and Politics.

Krauss tweeted her disappointment over the cancellation, and the University responded via its official Twitter account in attempt to reschedule the lecture. The University has given no further statement regarding the situation, but in its tweets stated that “two individuals” made the decision to cancel the event “unilaterally,” without consulting UM administration. One individual was later identified as Overby fellow and professor Curtis Wilkie, who release his own personal statement explaining the situation.

During her speech, Krauss shed more light on the rescheduling process for the event, which was moved to the Student Union.

“Thank you to the chancellor and the provost for their phone calls and actions last week, ensuring that this event would continue and that free speech is welcome here at Ole Miss,” she said. “As I told Dr. Boyce last week when we spoke, I know some fantastic alumni from this school, and in my days in New York City, I used to go to their events in Central Park, go out on the town and do karaoke.”

Krauss went on to voice her own opinion on the situation, saying “leftist” professors at UM had blamed her for any alt-right or neo-Nazi sympathizers who might attend the event.

She continued by criticizing the UM School of Journalism and New Media, and the media as a whole, asserting that if her speech, titled “Free to Offend,” was instead about “fashion, nail art or mid-century furniture,” the YAF group might not have lost the original venue.

“It’s ironic to me that the school of journalism didn’t want us using their center, considering that the media has been complicit, in my opinion, in the blatant mischaracterization of constitutional conservative Christians as racists and Nazis,” Krauss said. “Because true conservatives support a free press and will defend them.

“Even now, when the real haters in our society are targeting legitimate conservatives, the media ignores this story as a whole because it doesn’t fit the narrative of what they want the world to think conservatism is.”

Krauss went on to defend freedom of speech, citing examples of times in her life when, even though she didn’t agree with it, groups of protesters had a right to exercise their First Amendment rights. One example she gave was of a group of protesters burning effigies of then-President George W. Bush at the height of the Iraq War. Another was when Columbia University welcomed former Iranian president Mahmoud Ahmadinejad, and the University prohibited protesters from being seen by Ahmadinejad.

“I think a lot of our problems regarding free speech… could be solved if we had a ‘shoe-on-other-foot’ mentality. How would we act if the guy we disagreed with was trying to shut us down? What would we think if we were on their side of the aisle and those things were being hurled in there?” Krauss said. “The bottom line is, you’re not a victim, I’m not a victim. Because if you woke up in the United States of America today, you are among the luckiest people on God’s green earth.”

Individuals have the power to determine which speech they do and do not want to listen to, Krauss said, and that is the privilege of living in the United States.

Krauss went on to share her thoughts on protecting religious freedoms, from the Supreme Court-Hobby Lobby case to the Austin, Texas Mayor who requested a list of pastors she thought disagreed with her so she could figure out what they were saying about her during an election year.

“My pastor should be able to stand up and teach the principles of Biblical marriage and decry the atrocity of abortion using Biblical references, without ramifications from radical leftists or the government coming down on them,” she said. “The point is, what some people say at churches or mosques or temples in America today, I might or might not disagree with. I might not theologically adhere to their ideals, but they have a right to say them.”

Krauss then turned to comedians, many of whom have come under fire for past statements, such as Kevin Hart and Shane Gillis, who was fired less than a week after joining the Saturday Night Live cast.

She compared modern comedians and their use of free speech to Medieval court jesters, who had the “rare opportunity” to say whatever they wanted for the sake of being funny.

“You can’t even be funny anymore. Nowadays, everyone wants a proverbial head on a silver platter, especially if you have the audacity to point out a dirty truth or stereotype – the things the majority of Americans would find as funny,” she said. “… We know in 2019, if you’re not offended by someone or something, you must be a soulless ghoul.”

She also asserted that many modern comedians lauded by the media are chosen for their “wokeness,” rather than their ability to make people laugh.

Offending people is what comedians are supposed to do, she said, and that’s what free speech protects.

“I sincerely hope that, much like in politics and on college campuses today where we’re seeing more people stand up for their right to free speech, that these comedians are just the first wave of professionals on all sides who won’t apologize,” Krauss said. “And, I’m glad to see (comedians)… not caring what the SJW world thinks and defending their right to be ‘non-woke’ and just create their craft.”

Krauss closed her speech with a simple statement: whatever speech may be, individuals have a right to disagree with it.

“If you wake up every single day thinking that you are a victim or running into someone that offended you, what are you going to accomplish in life?” she said. “Do you really want to go through life thinking that everyone is turned against you? You are not a victim. I am not a victim.”

University of Mississippi enrollment down for third consecutive year