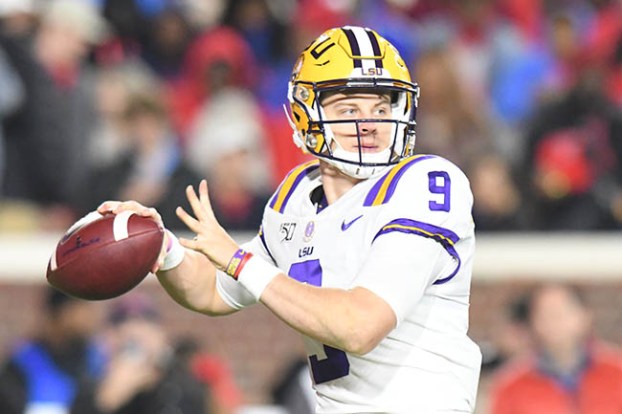 None happened inside Vaught-Hemingway Stadium.

Saturday night’s loss to LSU might make the fourth of those games this decade.

LSU quarterback Joe Burrow went 32 for 42 passing with 489 yards and five touchdowns on Saturday, throwing two interceptions in the third quarter. It is his only two-interception game of the 2019 season.

“He’s really good and the receivers are really good. Joe does a great job of getting the ball to the receivers in stride,” said defensive coordinator Mike Macintyre. “They’re one of the best offenses in the nation for a reason.”

Coming into tonight, Burrow was both the oddsmakers’ and talking heads’ favorite to win the 2019 Heisman Trophy. If he continues pace, and LSU plays in the SEC championship game, not only will Burrow break all of the LSU passing records; he’ll break both the SEC single-season touchdown and passing yards mark.

Simply put, Burrow shredded Ole Miss early. At halftime, he had thrown what for most passers is a full game – 22 of 24 with 316 yards and three scores. At one point he completed 17 consecutive passes. The Ole Miss defense stymied him a bit later in the third quarter, but he got back into it late.

“They executed well. (Burrow) is a really good player. He’s very accurate,” said head coach Matt Luke. “In the first half, he was able to extend plays with his feet and hit big balls down the field. I think that was the difference.”

In the third and fourth quarters, he went 10 for 18 with two scores and two interceptions, a bit better for the Rebel defense.

All of Burrow’s skills, ones that have made NFL evaluators salivate as he makes one of the more unprecedented rises in the history of the modern NFL draft, were on display Saturday night. His footwork in the pocket is impeccable, a one point working all the way back, moving up to evade pressure and hitting a receiver for a 34-yard touchdown in a full roll right.

“We had a lot of tacklers on (Burrow) clean and I was hoping we could get him down and force him to do some things. But he made some plays with his legs. He’s an excellent athlete,” MacIntyre said. “Everyone that plays against him says that he’s a better athlete than he looks. I don’t know what that means. He looks like a really good athlete to me.”

There’s a lot to love about Burrow from a football perspective, but the Rebels actually did a half-decent job on him at times. Keidron Smith and Deantre Prince were the two Rebels to pick off Burrow, something they’ll likely remember for quite some time if Burrow goes on to win the Heisman.

Interestingly, in other Heisman-related news, Ole Miss quarterback John Rhys Plumlee’s 200-plus yards on the ground Saturday was the first time an LSU defense had given up that many rushing yards to a quarterback since that aforementioned 2010 Cam Newton season.

It has become clear over the last two weeks that John Rhys Plumlee is the Ole Miss quarterback moving forward.... read more