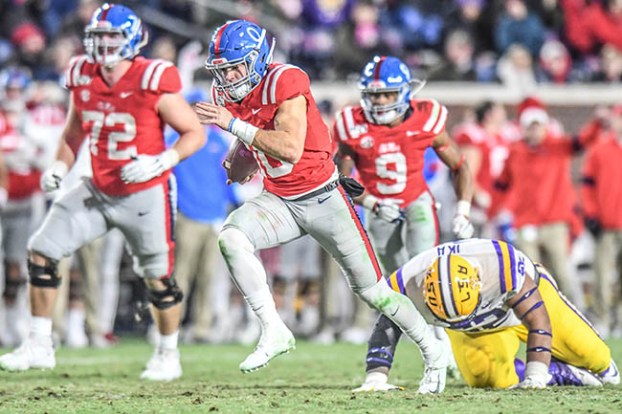 It has become clear over the last two weeks that John Rhys Plumlee is the Ole Miss quarterback moving forward.

Last week, Plumlee took every snap against New Mexico State until Matt Corral came in for relief at the end of the third quarter.

In Saturday’s 58-37 loss to No. 1 LSU, Plumlee got the start, and minus one drive in the first quarter in which Corral was under center, it was the true freshman’s game.

Ever since Corral’s rib injury early in the season, Plumlee was sharing playing time with the redshirt freshman. That game plan changed the last two games, and head coach Matt Luke and offensive coordinator Rich Rodriguez seemed to have finally settled on Plumlee.

The freshman from Oak Grove set a career high of 335 total yards of offense against an LSU defense that was holding teams to 340.4 yards a game. His previous career-high was 301 against New Mexico State last week.

Plumlee finished with 212 rushing yards and four touchdowns on 21 carries, and threw for 123 yards and an interception by completing 9-of-16 pass attempts.

“It’s really fun to play with this opportunity with this many people watching,” Plumlee said. “We knew it was going to be a hard-fought game. …As good as our running game was, there was a lot of opportunities that we left out there. We’ve got to get those fixed.”

Plumlee is also rewriting the Ole Miss freshman record book with each passing game. After setting two more quarterback rushing records last week, Plumlee’s 201 rushing yards were a new single-game record by a quarterback. Norris Weese previously had the record, with 178 yards against Mississippi State in 1972.

Saturday was also the first time a Rebel had four rushing touchdowns in a game since Dexter McCluster did so against Tennessee in 2009.

More than 1,300 yards of offense were recorded between both teams in a game that turned into a track meet in the second half. LSU put up 714 yards against what has turned into a rejuvenated Rebel defense that was giving up just under 400 yards per game. This game marked the most yards allowed by a Rebel defense this decade.

Unfortunately for the Rebels (4-7, 2-5 Southeastern Conference), it was yet another game of too little too late. A slow start once again put them behind the blocks, with LSU jumping out to a 21-0 lead 51 seconds into the second quarter.

“We had a good plan going in, we just couldn’t get it going early in the first half,” Luke said. “We knew (LSU was) going to score some points and we just didn’t score enough in the first half.”

Elijah Moore finished with the Rebels’ other touchdown of the night, catching nine passes for 143 yards. Freshman Jerrion Ealy recorded his first 100-yard game of his young career, rushing for 141 yards on 13 carries.

Entering their first season after a two-year exile from postseason play, the Rebels can still get an outside shot of making their first bowl game since the 2016 Sugar Bowl. A win against Mississippi State on Thanksgiving will give them their fifth win, putting the APR rankings into play.

The Rebels will need some help outside of the conference, but of the SEC teams, they are first on the list who would be bowl eligible, aside from Alabama and Auburn.

Interceptions told the course of the early game, until JJ Pegues and John Meagher connected for a long one to... read more