Plumlee improving with every start, passing efficiency coming around 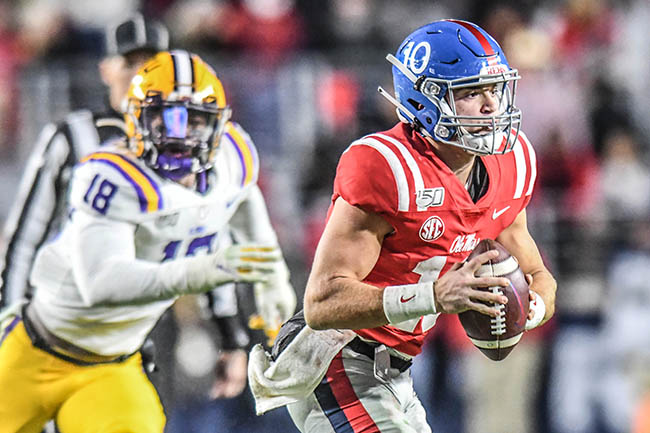 Mississippi quarterback John Rhys Plumlee (10) looks to pass against LSU at Vaught-Hemingway Stadium in Oxford, Miss. on Saturday, November 16, 2019. The loss of spring practices due to COVID-19 has stalled the quarterback battle between Plumlee and Matt Corral. (Bruce Newman, Oxford Eagle via AP)

What Ole Miss and Rich Rodriguez have claimed to be a two-quarterback system has quickly dissipated into a Plumlee-led offense. In a game matchup up against the Heisman favorite – LSU’s Joe Burrow – on Saturday, Plumlee flashed at times in front of a national audience in the loss.

He didn’t keep pace as LSU put up 58 points, but Plumlee is showing improvement with every start. For the young freshman primarily known for his legs, it’s actually the improved passing efficiency that may be more noteworthy.

Against LSU, the Plumlee-heavy Rebel offense set a season high of 614 yards of total offense, doing so against an LSU defense that was holding teams to 340.4 yards a game. Individually, Plumlee accounted for 335 of those, 212 coming on the ground.

Arguably the most impressive part of the game came on the ground, an area where the freshman from Oak Grove has excelled, but LSU has also excelled in stopping. LSU had allowed just 100.7 yards on the ground prior to the Ole Miss game but on Saturday the Rebels totaled 402 rushing yards.

Though just seven starts on the season, Plumlee has continued to etch his name on the Rebel freshman record book. This week, he set the Ole Miss single season freshman rushing record with 989 yards (where he ranks second nationally by quarterbacks). And not a record, but Saturday marked the first time a quarterback ran for over 200 yards on the nation’s No. 1 team since Texas quarterback Vince Young in the 2006 Rose Bowl national championship win over USC.

But as nice as the improvements on the ground are – and that is the focal point of the Ole Miss offense – what may stand out the most is his improved passing over the past few weeks.

The aggregate passing numbers are not eye-popping, but what stands out is how he’s getting to those numbers. In his career-high passing yardage game against Alabama, Plumlee got to 141 yards, but needed 28 attempts to get there. These past two weeks, he’s getting similar yardage numbers on significantly less attempts. The data is mostly backed up looking at his yards per attempt (YPA). Prior to New Mexico State, he had not topped 6.06 yards per attempt in starts (his California performance came in two drives off the bench). Now, Plumlee has had back to back starts above seven yards per attempt, including a career high 7.69 against LSU. He’s doing more passing on less attempts.

Ole Miss’ coaching staff reflects the necessity of the ability to both run and pass the football. Under Rodriguez, Ole Miss will always be a run-first team. But they can’t be one-dimensional – passing efficiently is still important. As John Rhys Plumlee takes over more of the complete starting quarterback role, his ability to throw efficiently when called on to do so becomes more paramount.

And despite a 4-7 record, Plumlee and Ole Miss are still not completely ruled out from getting into the postseason, this marking the team’s first season of potential eligibility following a two-year ban. A win against Mississippi State on Thanksgiving will give them their fifth win, putting the NCAA Academic Progress Rate (APR) rankings into play.

This year, 78 teams will make a bowl game. The APR rankings come into play when there’s not 78 teams with six wins. Ole Miss need some help outside of the conference, but of the SEC teams, they are first on the list who could theoretically become bowl eligible through APR.