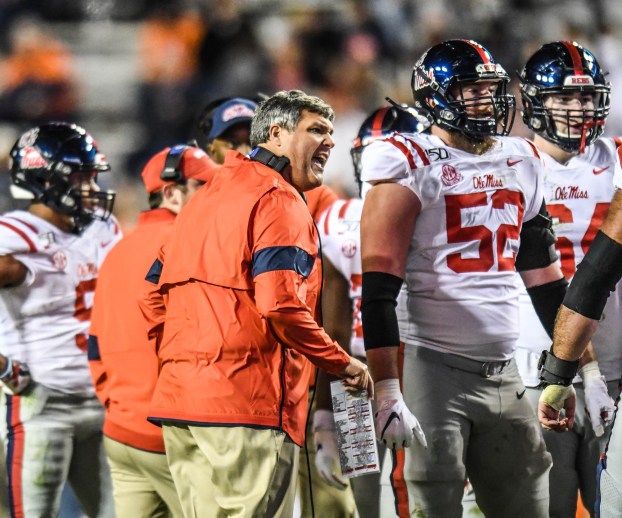 What is APR? How Ole Miss could make a bowl game at 5 wins

Despite sitting at 4-7 on the season and with just one game remaining, there’s still a shot for Ole Miss to qualify for a bowl game.

The first step is simple: the Rebels must win the Egg Bowl to get to five wins. The second step is more complicated, and Ole Miss will need outside help.

As it stands in 2019, there are 39 FBS postseason bowl games. That means 78 teams will be going bowling. In a perfect universe, there would be 78 teams that reach six wins and automatically qualify for a bowl, but we don’t live in a perfect world. Therefore, the NCAA has a plan of which five-win teams get offered bowl bids.

The NCAA Academic Progress Rate (APR) rankings determine which five-win teams get offered bowl games. Essentially, it’s a point system calculated by examining academic retention and eligibility. For the 2019 college football season, the 2017-18 academic year rankings are used. Ole Miss ranks tied for No. 38 in the APR rankings – ranking below just Vanderbilt, Alabama, Auburn and Arkansas in the SEC.

However, conference doesn’t matter in this sense. What matters is which teams ahead of Ole Miss in the APR rankings will either a) qualify for a bowl automatically by reaching six wins or b) fail to reach the five-win threshold that Ole Miss would achieve with an Egg Bowl victory.

Remember, the magic number is 78. No matter what, there will be exactly 78 teams in bowl games. At press time, 64 FBS teams have already qualified by winning six games. Fifteen more teams sit at five wins already, needing just one more to qualify automatically – this number is actually 14 for our purposes, as Missouri is under a bowl ban.

If all 14 of those win, Ole Miss cannot make a bowl, even with an Egg Bowl win. However, this is unlikely. Of the last eight seasons, at least one team with a 5-7 record got invited to a bowl in five of them. Assuming at least one, and hopefully a few, 5-7 teams make bowls, here’s what Ole Miss would need to happen.

As it stands, there are five teams ranked in the APR ahead of Ole Miss that stand at either 4-6 or 5-5 and could theoretically steal that bid. Boston College (APR No. 8) and Arizona State (APR 31) both sit at 5-5 and could automatically qualify with one more win. Regardless, those two are already at five wins and an APR rank higher than Ole Miss. They would earn that spot.

The schools Ole Miss needs to be rooting for (or actually against) are a duo of 4-6 teams: Duke (APR No. 3) and Ohio (APR No. 28). The bad news is Ohio has two games remaining against Bowling Green (3-7) and Akron (0-10). The good news is that Duke is underdogs in both their remaining games. There is one other 4-6 APR team ranked ahead of Ole Miss, Stanford. However, the Pac12 does not allow teams to go to bowl games unless they reach the six win plateau. So Stanford must win both its remaining games against Cal and No. 16 Notre Dame to qualify.

None of this matters if Ole Miss fails to win the Egg Bowl over Mississippi State on Thanksgiving Day. As the Rebel coaching staff stressed Monday, they’re operating as is this is a one game season. A handful of seniors were redshirting the year Ole Miss beat Oklahoma State in the 2016 Sugar Bowl, but no one on this current team has played in a bowl.

Plumlee improving with every start, passing efficiency coming around