“It’s turned into a rivalry”: Lafayette has another shot at clearing the West Point hurdle 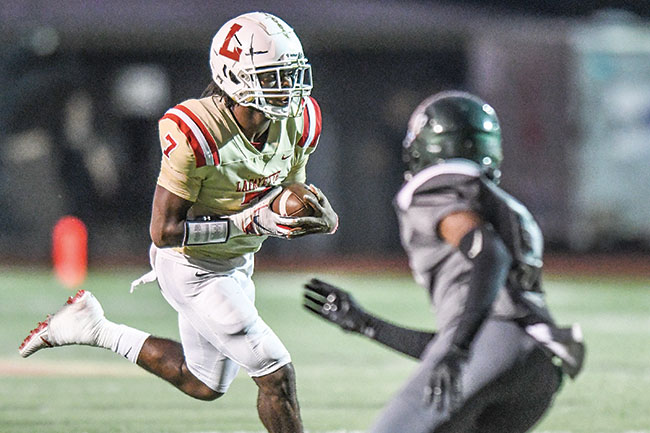 Rivalries tend take time to brew. That feeling of disdain laden with a core of mutual respect often is built over years of combative games and budding relationships between two sides.

This said, it’s taken just three years of 5A football for Lafayette and West Point games to get that sort of rivalry feel. The only problem with rivalry talk is simple: regardless of how close the games have been, Lafayette hasn’t beaten West Point since they joined 5A in 2017.

“It’s turned into a rivalry the last couple of years,” Lafayette head coach Michael Fair said. “Our kids know their kids. It’s two teams that are pretty similar in how we want to play, so it’s a good matchup every time we play. We’ve been knocking on the door. It’s been really close, one play away, the last three times we played them. We just have to make that play. That’s been the theme this week.”

When Lafayette finished off Holmes County Central a week ago, they knew immediately what it meant. In the team’s postgame huddle, they sensed a little glee – a little twinkle in each other’s eyes and some smiles. Despite recent results, this Commodore team wants West Point.

“Most schools would be like, oh no West Point. If anything, we kind of celebrated. We were excited. We’ve been ready to get back at them and get our chance,” senior lineman Levi Lott said. “Beating them would mean so much for our coaching staff and this community. This team, we’ve put so much into this since we were in seventh grade. Beating them would mean so much to us.”

Lott has been on the field for each of the past three Lafayette losses to the Green Wave; three losses coming by a combined 12 points.

It seemed earlier this season that Lafayette was finally going to get over that hump. The Commodores and Green Wave met in each’s Region 1-5A opener back in September. For one half, it was the best football the Commodores played all year, building up a 24-7 lead over their rival. Then things fell apart, surrendering three straight touchdowns to West Point and being called for a whopping 26 penalties in the game West Point would rally to win 28-24.

Fair’s message after that game was simple: What were these kids going to do between now and November so that we can get a shot at them again? The team responded by winning their next five games.

After the film review the week after the West Point game early in the season, Fair said the staff never once talked about West Point with the team until this week. Yet, he says, you could tell that game was still on everyone’s mind.

From a football perspective, this game becomes interesting just because of how well these two teams know each other. Having played four times in three seasons, they know each other’s tendencies. Fair said they’re looking for any chance to break those tendencies and he expects West Point to do the same.

West Point quarterback Brandon Harris stats on the season are very similar to Lafayette’s Randy Anderson. Harris averages 95.3 rushing yards a game (Anderson at 140.8) and 56.9 passing yards per game (41.8 for Anderson). However, where Lafayette runs a lot out of shotgun reads, the West Point reads come from under center. It’s something that takes the defense a little bit to get used to.

“We get to the same thing different ways. They’re very successful at what they do. They’ve been plugging and playing in this system for a long time now,” Fair said. “Two years ago, it was Marcus Murphy, who’s playing at Mississippi State now. He did the same thing that (Harris) is doing now. Their kids are brought up doing it and they were good at it then and they’re good at it now.”

The message from both Fair and Lott was one word: execution. This Lafayette teams believes that when they’re at their best the only team that can beat them is themselves. In the first meeting between the two schools in 2019, they believe they beat themselves.

Friday night, on the road at West Point they get a chance at that redemption and their first victory against West Point since the move to 5A.

Blake Hinson to make season debut against Memphis on…