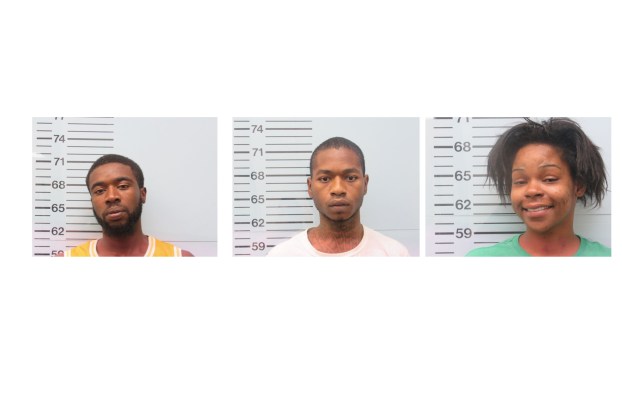 Justin Towler, left, and Chester Gipson, center, were charged with 14 counts of auto burglary among other charges in connection with reported burglaries in Garden Terrace. Kimberly Adams, right, was also hit with narcotic and burglary charges. (Credit: Oxford Police Department)

Three individuals are facing multiple felony charges after a spree of auto burglaries this week.

On Nov. 18 at around 6 a.m., multiple reports started coming in from victims who had items stolen from their vehicles. By the end of the day, the Oxford Police Department had taken 14 auto burglary reports and one home burglary report. Investigators began working tips and leads and even stayed out overnight.

Enough evidence was collected to earn a search warrant for a residence in the Garden Terrace area. The warrant led to the discovery of most of the stolen items, items reported stolen as far back as 2017 and narcotics.

On Nov. 19, two individuals identified as Justin Towler, 24 of Oxford, and Kimberly Adams, 28 of Oxford, were found in the residence of and taken into custody without incident and taken to the Lafayette County Detention Center. Later that day, officers apprehended a third suspect identified as Chester Gipson, 23 of Abbeville, who was also transported to the LCDC.

“We would like to remind everyone that the holiday season is approaching fast and to take this time to remember to lock your doors and remove valuables from sight,” interim OPD chief Jeff McCutchen said in a statement. “Remember, if you see something, say something. We will respond no matter what.”

OPD charged Gipson with 14 counts of auto burglary, one count of residential burglary and one count of possession of weapon by a convicted felon. He was given a bond of $100,000.

New edition of William Faulkner: The Cofield Collection to be released

On Friday, a new edition of “William Faulkner: The Cofield Collection” will be released as part of a special event... read more