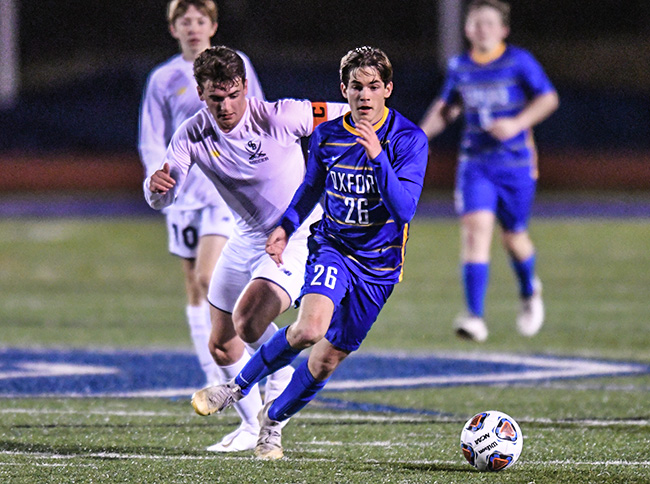 Both the Oxford boys and girls soccer teams have just one game remaining on their slates before the start of region play.

To this point, early in the season through non-region play, neither could really look much better.

The Oxford girls, so far, are 5-0, and it hasn’t been a cakewalk of a schedule either. The Lady Chargers are outscoring opponents 25-4 through five games, including a pair of 4-2 wins over Saltillo and Lewisburg. Those teams combined to go 30-8-1 a season ago. Oxford’s girls have been tested early, and they’ve come out on top each time.

“Every time we step on the field, we look a little bit better,” head coach Hunter Crane said. “This past Friday night was really good for us. We got to see a real good team in Lewisburg and they gave us a great fight. We probably looked the best we had all year in that game. Our rhythm and possession looked really good. I’m pleased with where we are so far. Obviously, there’s a lot of room to grow and we’re not a finished product, but where we are right now we look really good.”

Tuesday night, the girls had their most lopsided performance on the season, beating Olive Branch 8-0 in a game shortened by a new mercy rule implemented for 2019. The Lady Chargers had their issues staying onside in the game, with Olive Branch instituting a rarely seen offsides trap, leading to the Chargers getting called offside a dozen times that could have made the score look even more lopsided. But as Crane said, it’s not a bad thing to see something different early in the season.

On the boys side, the Chargers are now 4-0-1 through the early season after Tuesday’s victory over Olive Branch.

Like with the girls, their toughest test to date has come in last Friday’s meeting with Lewisburg, the defending 5A state champions. Oxford went to Lewisburg and drew 1-1 with a Patriot team that returned much of their unit from a year ago.

“I’m super proud of the effort they’ve been putting out,” head coach Charles Sabatier said. “Some of the freshmen that have stepped up and supported us have been impressive. Before these injuries, I didn’t think we were a team to not have depth. Now it kind of looks that way. But these freshmen really have stepped up, as well as a handful of other guys.”

Those injuries mentioned have come to a pair of critical upperclassmen, senior Luke Freeman and junior Josue Carrasco, both of whom have been out since the start of the season.

One thing the boys team is still figuring out is who will play goalkeeper for the team regularly come crunch time. Junior Coker Scott and senior Carson Gentry have been splitting time thus far in goal, with the staff still trying to figure out who will be the guy. So far this season, Scott has allowed two goals to Gentry’s one.

“We don’t play a district game until after Thanksgiving,” Sabatier said. “So our plan from the start has kind of been to give them both a half in these opening few weeks and make a decision when we hit district play. So I guess we’re closing in on having to making that decision.”

Oxford will travel to Tupelo on Thursday for their last tune-up to region play. Following that game, they’ll take a Thanksgiving break and return to the pitch Dec. 2.