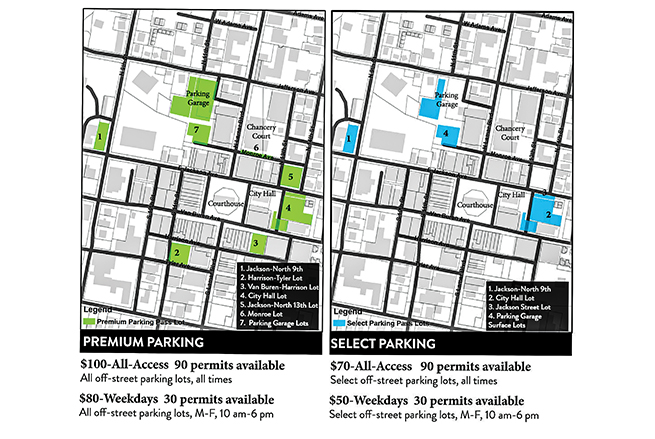 The new parking permits for Oxford’s Downtown Square area have been available for nearly two months, and already the City is reporting changes in motorists’ parking behavior.

In the first two months they have been made available, approximately 53 to 54 percent of the 240 permits have been purchased according to Matt Davis, Oxford’s director of parking. In October, there were a total of 128 permits purchased, with the $100 premium all-access permits being the most popular. 67 of the 90 permits were purchased in the first month.

The all-access permit was the most popular option in November as well, with 62 purchased. The cheapest option of the four permits is a $50 weekday (Monday through Friday) select parking permit which has 30 available each month. In October only 19 were purchased and all but one has been purchased this month.

“Permits are close to what we expected,” Davis said. “We would have thought that the $50 would be sold out the first month, but it’s relatively close to being sold out this month.”

The addition of the new parking garage, which includes three floors of free parking, has caused some of the off-street lots around the Square to free up. During Tuesday’s Board of Aldermen meeting, Davis mentioned the lot behind City Grocery is now around 60- to 70-percent occupied when discussing a separate agenda item.

“Parking lot occupancy rates have changed dramatically,” Davis said. “Most vehicles have moved to the garage, where we have free parking.”

Davis noted traffic during the week has gotten better, and fewer people are driving around the Square in search of a parking space. He also said Ole Miss football weekends are a little better than in years past, in terms of traffic flow, but once the spaces have been occupied the traffic does still tend to congest around the Square in its usual spots.

The permits are first-come, first-served and must be renewed or purchased every month.