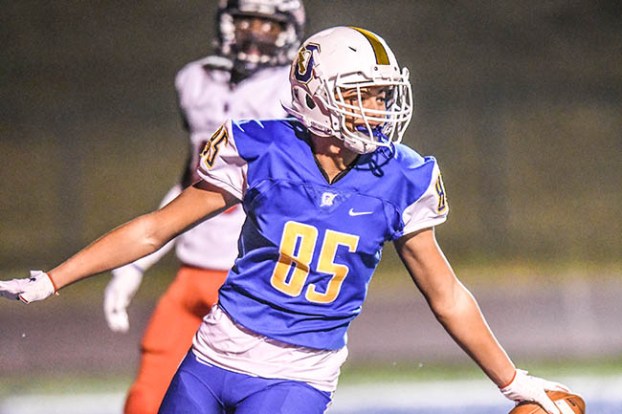 Oxford was the new kid on the block in Class 6A in 2017. They had just come off a dominating run in Class 5A with three straight trips to the state championship, but failed to reach the playoffs their first year in 6A.

Fast forward to 2019, and the Chargers are competing for a north half championship for the first time since 2015 after their 17-7 win over South Panola. A potent defense, Jack Tannehill’s leg and J.J. Pegues taking over the game in the second half was the winning recipe to keep Oxford (12-1) playing football during Thanksgiving break.

After 24 minutes of play, the Chargers and South Panola (12-2) went into the locker room with the scoreboard reading 0-0. Neither team could get an edge over the other in the opening quarters, with defense slowing down Pegues and the Tigers’ standout running back Janari Dean.

“At this time of year, everybody is so good that’s left,” Oxford head coach Chris Cutcliffe said. “Somebody asked me the other day about moving to 6A and the playoffs in 6A and I said, ‘When you look at it all the four teams in the north are good enough to win a state championship.’ So, I expected a tough, four-quarter game.”

The Chargers got on the board first, scoring a touchdown to open the third quarter. Quarterback John Meagher found Trynten Brannon for a 7-yard touchdown pass to give Oxford the 7-0 advantage roughly four minutes into the second half.

Despite Tannehill kicking a 64-yard punt to pin the Tigers back at their 7 yard-line, South Panola responded with a 93-yard touchdown drive of their own. It was capped by a touchdown catch from wide receiver Cameron Wright to knot things back up 7-all with a little over 10 minutes remaining.

Needing an answer themselves, Pegues put his teammates on his back and carried them to pay dirt. The senior capped a 10-play, 75-yard drive with a 9-yard touchdown run. Pegues’ score and a Tannehill extra point gave Oxford the 14-7 edge with 5:26 left.

Pegues finished with 151 rushing yards and a touchdown on 18 carries.

“(Pegues) is a special player,” Cutcliffe said. “You’ve got to trust your best players in your biggest moments and he stepped up for us.”

Tannehill was able to flip the field several times for the Chargers in key moments. Prior to his 64-yard punt, Tannehill booted a 54-yard punt in the second quarter that pinned South Panola deep in their own territory, which caused them to punt on the ensuing drive.

The game was sealed off with a 37-yard field goal by the Ole Miss commit with 79 seconds left in the game, giving the Chargers the winning margin.

“Two huge punts and (Tannehill’s) really done it all year,” Cutcliffe said. “He’s been so consistent for us and he works at it so much. He’s a fantastic leader for our team and he steps up in big moments.”

The Chargers defense has been a key component all season, and they did not falter on Friday. Two big takeaways at key moments were a big part of the difference in Oxford’s success and the Tigers’ failures.

Threatening to score inside Oxford’s 10 yard-line, Daedea Gross picked off a deflected Tiger pass to kill a promising drive. South Panola was trying to respond after Pegues’ touchdown but Kylin Dukes got the Chargers’ third interception of the night with 3:45 remaining in the game, leading to Tannehill’s field goal.

Byron Pearson also got an interception, setting a new single-season record with eight. He surpassed KT McCollin, who previously held the record.

Standout running back Janari Dean was held to 37 rushing yards on 20 carries. He also made one catch for 15 yards.

“I thought we did a fantastic job (on defense),” Cutcliffe said. “We tackled really well and kept (South Panola) from breaking one of those long runs they do every single week. …(Gross’ interception) was a huge play. Gross was in the right spot to make the interception.”

Oxford will host Starkville in next week’s Class 6A North Half championship and the right to play in Hattiesburg for the 6A state title. The two met on Aug. 30 in Starkville, with the Yellow Jackets pulling away late for the 45-17 victory.

WEST POINT – Sometimes, all you have to do is take advantage when given the opportunity. When Lafayette is playing... read more