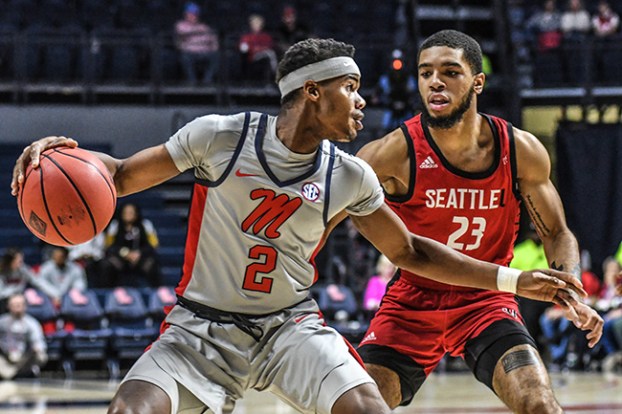 Rebel Hoops: Early season observations and what to watch against Memphis

Ole Miss has a huge opportunity coming this weekend: there’s no football to be played, and all eyes will be on the Rebel hoops program as they travel north to play No. 16 Memphis at the FedExForum.

Through the short start of the year, Ole Miss is 4-0. The defense has looked electric and the offense inconsistent. These were four games Ole Miss should have won, and they did. But there are a few things we can learn from these opening games, as Memphis approaches.

The Rebels have exponentially more athletic upside than a year ago

It’s going to take time for the Ole Miss big men to get to their potential. They’re either young, inexperienced or both. At times this year, they’ve looked lost and hesitant. All this said, it’s evident that these new Rebel big men have endless amounts more potential than that of a year ago, simply through their pure athleticism.

Kermit Davis mentioned recently that, specifically Sammy Hunter and Khadim Sy, need to be more confident scoring around the goal. He wants them quickly taking balls up and getting fouled or scoring.

Thus far on the season, the athleticism from the Rebels has been most on display defensively, particularly their ability to defend the rim. There’s reason Ole Miss ranks No. 7 nationally in points allowed through the early season, giving up just 52 points per game.

A year ago, Devontae Shuler made one of the bigger jumps in the SEC from his freshman to sophomore year. Now a junior, it appears he may have done it again. Shuler shot 25.9-percent from the three as a freshman. His sophomore season, that number jumped to 40.2-percent. It’s a small sample to start this 2019-20 season, but that number is up to 46.7 percent. For reference, J.J. Redick never shot higher than 42.1 percent from three in a season in college.

Davis raved about his sophomore swing-forward after the Ole Miss game against Norfolk State last week. It was easy to see KJ Buffen’s potential a year ago, as a 6-foot-7, lanky young talent. Now, Buffen is putting the pieces together.

Through four games, Buffen is averaging 14.3 points and 8 rebounds for the Rebels. But more impressively is how he’s doing it. Buffen has said that he doesn’t shoot too much, because he hates taking bad shots. Davis laughed, joking about how rare it is to have a player who thinks that way. His shot selection is evident, converting on 71 percent of his shots through the early part of the season. He’s even shot two for four from three-point range.

“He can play through contact better. And he’s more confident shooting the ball,” Davis said. “Y’all can see it, just (shooting) from 16 and 18 feet, he’s confident. Last year, he was even hesitant at the high post. He feels better and he’s gotten off to a good start and is playing with a great deal of confident.”

Davis has compared Buffen to former Kentucky big man PJ Washington. He knows his sophomore isn’t as polished yet, but he loves the strength, shooting, ability to finish with both hands around the rim.

Now, after four games against relative no-name teams, Ole Miss turns its focus to a road game Saturday at the FedExForum. The next opponent is, on paper, as tough as any they play this year: No. 16 Memphis. The Tigers will be without potential No. 1 pick in the 2020 NBA Draft, James Wiseman, who is suspended until January by the NCAA, but it’s still a Memphis team laden with talent. Here’s what to watch for when the Rebels travel north.

Sophomore forward Blake Hinson will make his season debut on Saturday after missing the past few months due to health issues. His return in full to the team comes at a great time. As good as the Rebel defense has been, holding teams to 52 points per game, the offense has struggled. Through four games, Ole Miss is averaging just 72.3 points, ninth in the SEC.

Kermit Davis has continued to say how the ball isn’t moving the way he wants thus far this season. It also doesn’t help that Breein Tyree, a first-team All-SEC contributor a year ago, is shooting 39 percent from the court and just 19 percent from three. It’s safe to say that Tyree’s shot will bounce back, but also the return of the Rebel spark plug in Hinson will help as well.

Hinson was inconstant as a freshman, but still proved an explosive three-point weapon. He had some huge games, including a 26 point outburst on the road at Mississippi State, and some clunkers. But Hinson is still a talented offensive weapon and simply an energy guy that can only help the Rebel offense.

How will the Rebels fare on the big stage?

Ole Miss was fantastic at times in Davis’ inaugural year. However, there were moments where they failed to finish, especially on the national stage. Late in the season last year, they lost two games against No. 7 Tennessee and No. 6 Kentucky in the last minute. They then laid an egg in the opening round of the SEC Tournament before getting run out of the building against Oklahoma in the NCAA Tournament opening round.

Saturday, against the No. 16 team in the nation and local Memphis team that’s getting all the hype, Ole Miss can put all those big-game problems that came late last season in the rearview mirror. The Rebels have a handful of opportunities to look good nationally coming up, including a Butler game at home and the NIT Tip-off tournament over thanksgiving weekend. But this run all starts Saturday with Memphis.

South Panola is battle-tested. They’re led by one of the best coaches in Mississippi history, and sport a defense that... read more