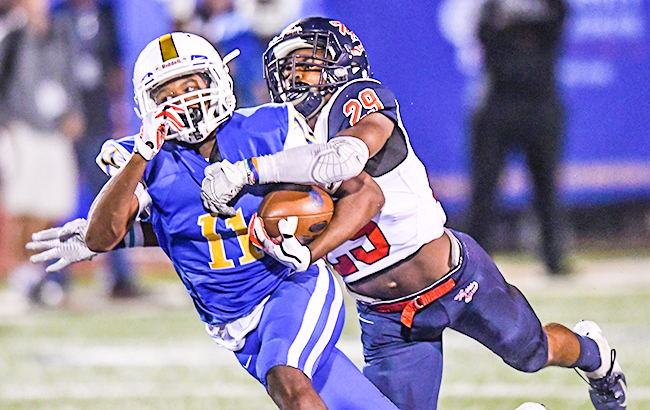 South Panola is battle-tested. They’re led by one of the best coaches in Mississippi history, and sport a defense that allowed under two touchdowns per game in the regular season.

In a game where 22 football players take the field at a time, it’s hard to put an entire game on one man’s shoulders. But without running back Janari Dean, South Panola would be in serious trouble against the Oxford Chargers. He evens the playing field.

Dean, a three-star recruit heading to Mississippi State as a safety, does play a little defense for the Tigers. But right now, he’s primarily a tailback – and he might be the best tailback in the state. Over his 163 carries this senior season, South Panola averages 9.6 yards every time Dean carries the football. Last week, in the first round of the playoffs, Dean rushed 28 times for 263 yards against Tupelo, personally accounting for three scores in the 39-23 Tiger win.

“Janari is a fantastic player. You stress tackling really well, but that’s easier said than done against a guy as talented as him,” Oxford head coach Chris Cutcliffe said. “We have to tackle well in space and you can’t let him get going. What he does so well is create long, explosive runs. So, everybody has to do their job and tackle well and that will prevent the long runs. But as I said, that’s easier said than done.”

Both Oxford and South Panola lost just one regular season game. Both teams lost to Starkville, and only Starkville. Even against Starkville, Dean got his, going for 132 yards on 20 carries and scoring twice on the ground; he also threw a 61-yard touchdown. But what the Yellowjackets were able to do well against South Panola is eliminate everyone except Dean offensively. South Panola quarterback Anterrio Draper completed just 35-percent of his passes in the game and was intercepted twice.

Cutcliffe said he watched a good bit of that Starkville film. He doesn’t like harping too much on past games, especially in their case when that past game came all the way back in September. That said, it’s good to have it on film to see the only game this year in which the Tigers really struggled.

Through it all, it’s a pair of Oxford and South Panola teams that are familiar. The two schools played twice in the last two years, splitting the games. Oxford took a 35-21 game last year after losing 14-0 in 2017. The kids know each other, and the coaches might know each other even better.

“Coach Woods is one of the best, maybe the best to ever do it in the state of Mississippi. His record speaks for himself,” Cutcliffe said. “We’ve had a lot of games against him. And it’s interesting because these two schools are so close, a lot of our guys grew up with the guys that are at South Panola now. There’s a lot of familiarity there. Sure we played in high school the last two years, but these kids played peewee and middle school football together. This is just the culmination of that.”

On the other side of the North-half bracket is that one familiar opponent the Chargers and Tigers have had to look back on all year. If Starkville can get past Olive Branch, one of these two teams squaring off in Oxford on Friday night will get their rematch over Thanksgiving weekend.

But right now, all eyes for Oxford are on South Panola and a strong week of practice. There’s no looking ahead, no looking behind. There’s only the now.

“Our message all year has been that the teams that make a run in the playoffs are the teams that continue to get better throughout the year,” Cutcliffe said. “We’ve had some really good practices this week and we know we have a huge challenge with South Panola. This time of year everyone’s good. We have to go out and play really well.”