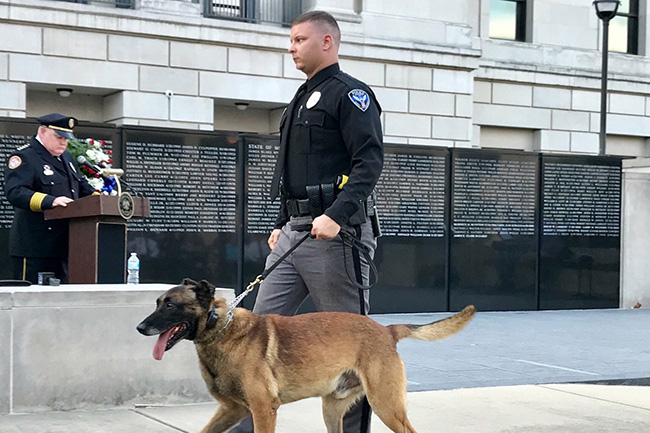 After five years of service, Mattis is ready to stretch out in the yard and enjoy a well-deserved bone.

The Oxford Police Department’s longest-tenured K9 officially entered retirement this week, when the Board of Aldermen approved the department’s request during their Nov. 19 meeting.

Interim police chief Jeff McCutchen presented a resolution in Mattis’ honor to the Board, which was unanimously approved.

Since working for OPD in 2014, Mattis has been involved in several recovery missions, including finding two Alzheimer’s patients and a three-year-old child. The Belgian Malinois was also responsible for several narcotic seizures, including finding four pounds of heroin at the Oxford post office.

“An incredible animal,” McCuthen said. “Mattis has probably been the cornerstone of where our program is now. …Unbelievable nose. Wonderful dog that was probably our best tracker. Sometimes, you get a dog, and it’s kind of like people. They’re good at specifics and not so great at others. Mattis was that complete animal.”

Unfortunately, Mattis is having to enter early retirement due to a medical condition which affects his breathing. Since around 2015, Mattis has been dealing with the condition and as he grows older it has become more of an issue.

When Mattis was out on a search in the summer heat, for example, he was unable to run for long distances before beginning to show signs of the condition and having trouble catching his breath.

The decision was made for Mattis to enjoy the remainder of his life in a less-stressful environment. He will continue to live with his former partner, sergeant Alex Moffett. The two have been working together since fall of 2015, minus a small stint apart when Moffett worked with the Mississippi Bureau of Narcotics.

“When I first brought him home, I was terrified,” Moffett said. “He barked the whole way to the house and I remember getting out of the car I was just like, ‘Please don’t bite me.'”

Working with a human partner is vastly different than working with an animal in the police force, but at the same time it is very similar. Moffett said he would find himself talking to Mattis during patrols as one would do with their partner sitting in the passenger seat.

Mattis would sit in the back seat of the patrol car, but Moffett would open the middle panel to allow his partner to see. The two were so in sync with one another that if Moffett would turn his head to look out the left or right side of the car, so would Mattis.

Not the typical house dog

Having a K9 for a partner means bringing the dog home every day. Moffett said he had little to no transition time with Mattis before he picked up him from the home of his previous partner and brought him to his house.

It was a learning curve under fire for the two, but slowly Moffett said he learned his new partner’s habits.

“You take about a month or two with them and just bond,” Moffett said. “What’s really cool about him is, a normal day you wake up and get in the shower. As soon as he hears the shower running he’ll start barking. If I walk out and I’m just in jeans and a t-shirt it’s like he just shuts down as far as ‘Okay, we’re just chilling at the house.’ If I walk out and wear my uniform you’ll hear him start making laps around the yard. He’s just a different dog.”

Since entering retirement, Moffett said Mattis has had a tough time adjusting. He will still make his pre-tour laps around the backyard if he sees Moffett in uniform. Moffett said he does his best to not be seen when leaving the house, but hopes as the months pass, Mattis will accept his time of service is over.

With two young kids at home, Moffett keeps Mattis outside, but he said it is comforting to him to know he has a well-trained guard dog to protect his family when he leaves for his patrol.

It has been an adjustment for Moffett as well.

“It’s quiet,” Moffett said. “It’s pretty obvious he’s not there. When he would get in the car, he would figure eight all night long in the back. Just constant. If the car is moving he’s figure-eighting. …What people don’t realize is I spent more time with that dog than anybody else. I was with that dog more than I was with my family. Everything I did centered around him.”

Being allowed to keep Mattis means Moffett will not be given a new K9 partner, but he is still over the K9 force and has also transitioned to his new role of overseeing the Downtown unit that works the Square.

Meanwhile, Mattis is back home making laps in case he is ever needed to protect his newly assigned beat.