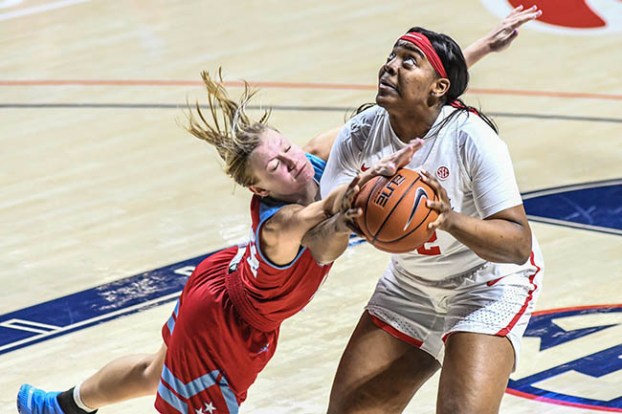 Ole Miss women’s basketball cruised to a 76-53 victory over Louisiana Tech, led by a dominant offensive performance from Deja Cage, who scored 30 points Saturday at the Pavilion.

“When you are coaching a young team like we are, you never know what to expect,” said Ole Miss head coach Yolett McPhee-McCuin. “But I thought my coaching staff responded well to the challenge that was put in front of us. We’re figuring out who we are with this young group. We brought it defensively tonight, and that is what we have to be known for this year.”

“We have to find each opponent’s weakness,” McPhee-McCuin said. “Louisiana Tech is well-coached and they play really well when they are comfortable. So, we all decided to take them out of their rhythm, because that is where they are best. We decided to up our level of intensity and because of it, we were able to turn them over and get easy baskets.”

Cage’s 30 points marked the highest scoring total for Ole Miss since Crystal Allen scored 30 against Tennessee on March 3, 2019. Cage shot 10-of-18 from the field and 5-of-8 from beyond the arc, highlighting her offense efficiency that has been on display for most of the season. The junior leads Ole Miss with 17.4 points per game on 52.3 percent shooting.

“Deja, that’s what she is,” McPhee-McCuin said. “I don’t believe leaders are taught; I believe they are born. I think scorers are born, and Deja is a scorer. I felt like she would have a good game today.”

Ole Miss also had several other impressive individual performances, including junior Valerie Nesbitt. Nesbitt got injured early, but came back and had the best game of her collegiate career. She set career-highs across the board, including points (12), rebounds (six), and assists (eight).

“What we love about Sarah is that she is one of our toughest players,” McPhee-McCuin said. “She is a kid that came to the United States to fulfill her dream. She made it clear when we were recruiting her that she wasn’t like the average person and she wanted to win. She has been taking coaching really well and we have been challenging her. That is why she is having success.”

Ole Miss has a quick turnaround, staying at home to host Sam Houston State at The Pavilion on Tuesday night. Tipoff is set for 6 p.m. CT.

MEMPHIS, Tenn. – Saturday afternoon in the FedExForum felt like a February in the Pavillion, complete with the energy of... read more