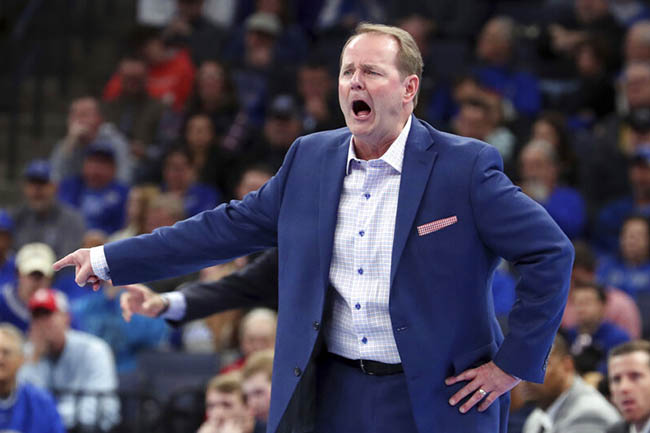 Ole MIss coach Kermit Davis calls to his players in the first half against Memphis on Saturday, November 23, 2019, in Memphis, Tenn. (Karen Pulfer Focht, AP)

MEMPHIS, Tenn. – Saturday afternoon in the FedExForum felt like a February in the Pavillion, complete with the energy of an SEC basketball game.

A November basketball game played Saturday in the middle of college football season, the FedExForum was almost sold out to watch Ole Miss nearly complete the comeback against No. 16 Memphis. An announced attendance of 17,875 was rocking, creating a truly great college basketball environment.

For Ole Miss and head coach Kermit Davis, it’s a game they want to play every single season with their rivals just 84 miles north.

Davis said it was one of his first priorities. When he talked to Hardaway about making the game happen, there wasn’t much negotiation. Both coaches wanted the game done. Davis was very willing to concede coming to Memphis to play this season, just to make logistics simple and get the ball rolling on the game.

At least to this point, the series is only scheduled as a single set of home-and-home games. Memphis will be coming to Oxford and the Pavilion at Ole Miss next season on Dec. 5, 2020 for the second leg of the series. If any games are to be played beyond that date, they are still to be decided on and announced.

“Hopefully, it’s two NCAA Tournament teams playing against each other every time,” Davis said. “I think the fans look forward to it.”