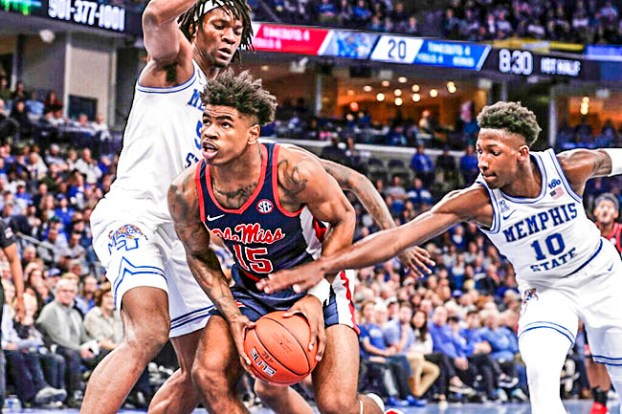 Ole Miss comeback bid falls short in loss to No. 16 Memphis at FedExForum

MEMPHIS, Tenn. – Ole Miss nearly pulled off a miraculous 16-point comeback on Saturday at the FedExForum.

At one point trailing 64-48, Ole Miss had a late chance to send the game to overtime. They came up just short, dropping their first real test of the season Saturday, losing on the road to No. 16 Memphis  87-86.

Energy in the FedExForum was at a premium – the game had the feel of a high-level SEC game all afternoon. Depite Ole Miss jumping out and holding on to an early lead, Memphis prevailed as they crawled back in the first half. With Rebels center Khadim Sy sidelined with foul trouble for the majority of the first half (he played four first-half minutes), Memphis was able to control the game around the rim offensively.

Of the 45 opening half Tiger points, 42 came from inside the paint or the free throw line. The duo of Breein Tyree and KJ Buffen kept the Rebels alive offensively in the opening frame, combining for 25 of the 38 Ole Miss first-half points with Sy sidelined.

Returning in the second half, Sy made his presence known, particularly with his help defensively and his ability to move the ball on offense. The issue is that his Memphis counterpart, center Precious Achiuwa was simply the best player on the court Saturday. Achiuwa controlled the paint, recording just two blocks but limiting anything the Rebels could do inside offensively.

“It was 52-20 in the paint,” Davis said. “They killed us around the goal, driving and offensive rebounding, but give our guys a lot of credit. We got in deep foul trouble.”

With Ole Miss shooting just 39 percent, they settled for threes. Some they made, but when Memphis was able to start hitting on their own from the perimeter it became difficult for Ole Miss to keep up. Memphis hit on back-to-back three pointers midway through the opening 10 minutes of the second half, quickly expanding their six point halftime lead to 64-48 with 11:19 to play in the game, but the Rebels had some fight left in them.

Ole Miss was never truly out of the game. With a struggling Devontae Shuler sidelined, Ole Miss mounted a late comeback. A three pointer by Sy and a pair of Tyree free throws with 4:22 to play cut the Tiger lead to 70-65.

The Rebels had their chance to send it to overtime. After cutting the Tiger lead to five a handful of times, missed Memphis free throws and a pair of plays by Tyree at the rim cut Memphis’ lead to 84-82 with nine seconds to play. Memphis made just one of their subsequent free throws, giving the Rebels the ball back with eight second left down 85-82. Memphis would foul Tyree on the floor for two shots, of which he would miss one. Game over.

“It was just one of those games at the end, where we couldn’t make a play when we needed to,” Davis said. “Just a good college basketball game in November.”

It appeared as Tyree was fouled that he was going up for a three-point attempt. Officials ruled the final foul to have occurred before the shot, a non-reviewable play. Final score: 87-86 Memphis.

Following the Memphis trip, the Rebels will be spending Thanksgiving weekend in Brooklyn for the NIT Tip-Off. They play Penn State on Wednesday and then either Oklahoma State or Syracuse on Friday, both games televised nationally on ESPN Networks.

Oxford was the new kid on the block in Class 6A in 2017. They had just come off a dominating... read more