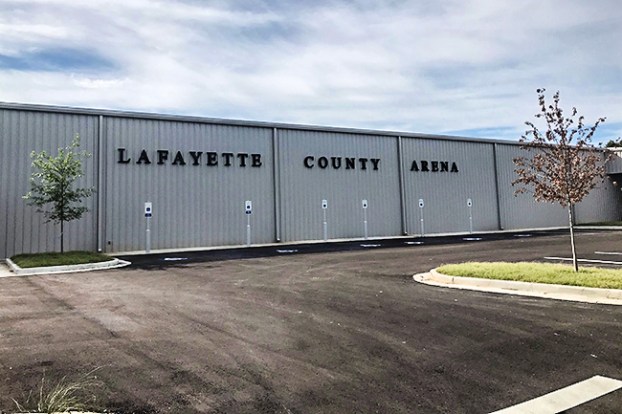 After a soft opening in August, the new Lafayette County Arena is ready to have a big year in 2020.

With a handful of months under their belt, organizers with the complex have taken notes and constantly mad adjustments toward booking events for the multi-purpose building going forward.

“I’m excited about what we have coming,” said Yoknapatawpha Arts Council executive director Wayne Andrews. “There’s still some things we have to, operationally, get going so we can have the volume of people we’re hoping to have; some fire suppression things and things that we’re still working on.”

In June, the Lafayette County Board of Supervisors approved Andrews and YAC to be the management team for the arena and its surrounding facilities, including the soon-to-be completed adjacent outdoor amphitheater.

Since the opening of the facility in the late summer, there have been regular open ride nights and classes being held in the education room in the front part of the arena. The annual Spooktacular event has also been relocated to the arena to make it safer and more enclosed to combat the colder weather.

Some high school athletic events will also be held in the arena. Andrews noted Lafayette High’s power lifting team will hold an upcoming meet at the facility.

“I’m excited about the direction we’re going and because we started slow, and the hiccups have been small, that’s allowed us to bring in everyone from the fire marshal and the electrician,” Andrews said. “We’re learning as we go without it being, ‘Oh, we’ve invited 5,000 people here and nothing’s working.’ We’ve done it small and incrementally and now we’re gearing up for the right thing.”

In early fall, a gun show took place the arena along with other events, which helped Andrews and his team identify some of those small “hiccups.”

The amphitheater, which will seat approximately 6,000 people, is nearing fruition, but Andrews said his team is still working on ways to use the space properly. The City of Oxford is also considering changes to its noise ordinance, which could potentially affect ideas for the amphitheater.

“We’re all trying to figure out, ‘Okay, we have a great space. We have a great opportunity. How do we do this so it’s a compliment to the community and not impacting?'” Andrews said of the amphitheater. “It’s a big space. I think our target number of what is viable is a lot less (than 6,000), but I think once it gets up and running, the opportunity to bring something big out there (will be there).”

Andrews said they are working on finalizing some events for next year and hopes to be able to announce them soon. The arena is located off of F.D. “Buddy” East Parkway South behind the new business complex.

South Lamar Boulevard could soon be getting a new traffic signal. During Tuesday’s Board of Aldermen meeting, city engineer Reanna... read more